In an attempt to LG recapture some of its old glory LG released the first phone with the next generation Snapdragon S4 Pro chipset. The Samsung Galaxy S III has been out for several months now, but is yet to beaten as the best Androids smartphone on the market. The Optimus G looks like the strongest challenger so far and it seems to have a very good chance of being pronounced the new king by the end of this review. 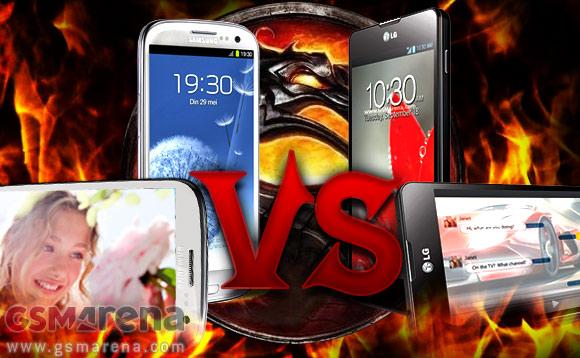 Together, the two handsets represent the quad-core Android phone elite, so we just had to pit them against each other to decide who's the best. We kick off with the most prominent advantages that each of the contenders holds over its opponent.

Having a next-generation chipset is a great advantage for the Optimus G, as it should give it both performance and power efficiency advantage over the Galaxy S III. On the flipside, the Galaxy S III and its Exynos 4 chipset have the optimizations of Jelly Bean on their side, so it might not be a walk in the park for the LG flagship.

LG also brought the best that its display divisions had to offer - the Optimus G is betting on a True HD-IPS+ LCD. The Samsung Galaxy S III on the other hand didn't stay in the R&D lab long enough to get a three-subpixel-per-pixel AMOLED like the Galaxy Note II, so it has to settle for a PenTile matrix. However, the AMOLED technology has some key advantages over LCD, so again we'll have to do some testing before we find out who comes on top.

The camera sensors on both smartphone beasts are Sony-made, but while LG thought ahead and secured 13MP unit, Samsung used 8MP sensor. And while LG does have a theoretical advantage here, lens and image processing might make a big difference, too.

In theory, the LG Optimus G should walk away with the win here. Having spend a few extra months in development and managing to snag newer components, the LG flagship is the clear favorite in this fight. However, the Galaxy S III won't give up the crown without a fight. After all, there's a reason why Samsung is the world's largest smartphone manufacturer with a near two-fold advantage over the second-placed Apple.

Strap on your seat belts, as it might get rough.

Wow, what a fanboy! It's one thing to say that another brand loses, but it's another to exaggerate as much as you did. First of all, this review clearly shows that S3 is indeed a competition, and despite its age, a very good one. Second of all, Note ...

In eu the price of this 3 devices are more or less the same! This is the real mid-high battle.. -On screen vs hardware/capacitive buttons -amoled vs ips -pure google vs proprietary ui -oldest vs newest chipsets All with 2gb of ram! ...