Gallery is robust and responsive

The LG Optimus GJ uses the same gallery app as the Optimus G - in effect, a near stock Adroid gallery with a few custom touches here and there. It automatically locates images and videos no matter where they are stored on the phone. By default, images are sorted by albums, but you can sort by location or time as well. Albums, which are on an inserted microSD card, are indicated as such by a small icon.

The different sets are tiled neatly across the screen. You can expand or shrink individual albums using a pinch gesture, making the elements of the grid of photos either really huge or very tiny.

The Gallery app displays images in full resolution. Zooming and panning involves no lag whatsoever thanks to the quad-core Krait CPU.

The music player on the LG Optimus GJ also looks much like the one inside the Optimus G. The interface is simple, easy to use, but still offers a lot of functionality.

The Now Playing screen displays a tracklist in landscape mode

The video player on the Optimus GJ has a fairly simple interface, giving you just a grid of all the videos on the device. There's an alphabet scroll to help users locate videos faster but that's about it. You can, of course, play videos from the Gallery if you prefer its folder-centric organization. For each video you've started, the thumbnail gets a tiny clock icon, which shows how far into the video you are.

Another feature is a Video Speed control (you can set values from 0.5x up to 2x). There's a lock button too, which hides all controls for pure full-screen viewing. Another cool addition in the video player is Live Zooming. You can zoom in (with the familiar pinch gesture) during playback and some serious magnification is allowed, not just a quick resize or fit to screen.

The LG Optimus GJ handled everything we threw at it - DivX, XviD, MKV and MP4/MOV up to 1080p resolution. The AC3 audio codec (among lots of others) is supported, so you don't have to worry about the sound. There are were no issues with higher bitrates and file sizes, either, and subtitle support is chock-full of customizations.

LG took Samsung's pop-up play feature a whole lot further with QSlide. In the latest Optimus UI iteration, LG has added a new batch of apps that take advantage of the functionality. Those include the web browser, Memo, QVoice, Calendar and Calculator. Furthermore, you can launch any of them from the notification drawer.

QSlide lets you watch a video while using the smartphone

The LG Optimus GJ showed nicely clean output in both parts of our traditional audio quality test. The smartphone got pretty decent scores, but was led down by its volume levels, which were well below average.

There's very little degradation even when you plug in a pair of headphones. The stereo crosstalk worsens a bit but the rest of the readings are virtually unaffected. Unfortunately, the volume levels plummet even more on that occasion and are among the lowest we have seen, so we can't give the water-loving smartphone full marks here. 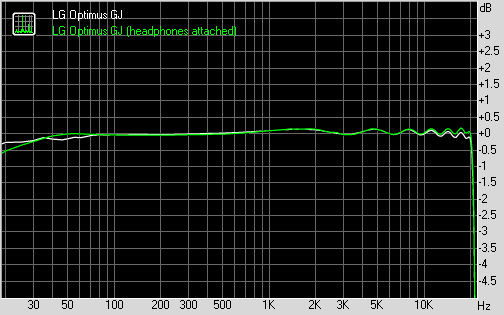