LG officially took the wraps of the Optimus GK Android smartphone. Made for the Korean carrier KT, the newcomer packs all the functionality of the LG Optimus G Pro, but in a smaller body with a 5" display. 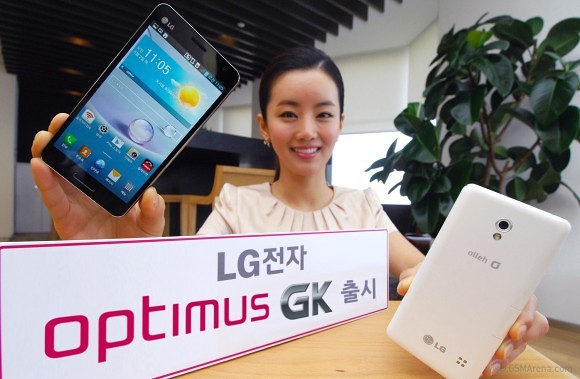 Like its bigger brother, the LG Optimus GK is powered by a Qualcomm Snapdragon 600 chipset, whose four CPUs tick at 1.7GHz. There is 2GB of RAM and 16GB of built-in memory on board, which can be further expanded via a microSD card slot. The display is a 5" Full HD IPS unit with a pixel density of 441ppi. A 3100mAh battery, 13MP main camera, and a 2MP front-facing snapper complete the highlights of the handset's spec sheet. The OS of the device is Android 4.1.2 Jelly Bean.

Pricing of the LG Optimus GK is yet to be announced. There's no word on international availability just yet.

please can anyone help with LG F220K (GK) touch, i stay in Nigeria anyone please.

Could anyone hekp me to get lg f220's touch , just touch in Islamabad ,. My phone's screen js working properly but its touch doesn't work.