LG Optimus One will get Gingerbread this May (hopefully)

We already know the Froyo-running LG Optimus One best-seller will be getting the Android Gingerbread update, but so far there was no telling when this might happen. Now, thanks to LG India we know that the update will most likely be happening in May. 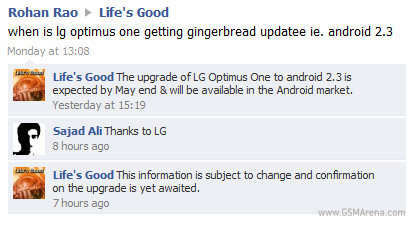 LG initially stated the Optimus One won't be upgraded to Android 2.3 because it doesn't meet the minimum requirements. However the company changed its mind shortly after that and promised us a Gingerbread update. It will come half a year later - somewhere by the end of May.

And just when we thought things are about to become crystal-clear LG posted another statement to confuse us. It seems the May thing is not confirmed and things might change.

We are hoping this second message has something to do with the LG legal department, who are afraid of the consequences if the company misses a promised release date.

Anyway, the most important thing here is LG is working on the Gingerbread update and it close to being completed.

Gingerbread is out in Delhi/NCR.Go get it from LG service center.