The Optimus Pad gallery is a pretty standard Android affair in terms of functionality but it has too been tweaked to feel more comfortable on the large screen. Naturally, your Picasa web albums are automatically synced with your tablet.

The Optimus Pad image gallery is performing nicely, but shows downsized versions of your images

You can sort your images by album, date, location or tag. You can also choose between displaying images, videos or both.

Sorting and filtering your images

When you are browsing a specific album/date/location/tag the shortcuts change a bit – the extra settings shortcut is replaced by a button that starts a slide show. The icon in the very top left corner becomes active and clicking it brings you back to the full gallery view.

Unfortunately, the Optimus Pad gallery has the same issue as most of its smartphone siblings – it doesn’t show you full size images, but downsized versions instead. This means that you cannot see all the detail on a photo on the tablet itself, which is a pity, given the excellent picture browsing potential.

Image details can be checked from the tablet itself

To end the gallery overview on a positive note we’ll mention a cool accelerometer-based trick. In the default view, albums with more than one photo inside have a cool 3D shadow effect when you tilt the slate.

The cool 3D effect activated by the accelerometer

The Optimus Pad music player has a visually appealing interface and lets you sort your tracks by album, artist, song, genre, playlist or just bring the new and recent additions on top.

The music player is quite the looker

Naturally, there’s also a search option, which will be greatly appreciated by those with large music collections. It gets activated by pressing the magnifying glass icon in the upper right corner.

Searching is quick is and convenient

When you select a specific album (or a group of tracks based on any filter) you get the familiar split screen interface. Album art, which is naturally supported, appears on the left along with the playlist details. The track list goes on the right and the currently playing track (if any) appears at the bottom with quick controls available.

The now playing screen offers shuffle and repeat (including repeat one) functionality, but no equalizers.

Finally, if there is a track playing in background, a dedicated row appears in the notification area showing its name. There are also quick pause and skip controls right there so you don’t need to open the music player every time.

Despite the large screen and enviable processing power, the LG Optimus Pad doesn’t make for much of a portable video player. And you can tell that right from the start as the thing doesn’t even have a dedicated video player app - everything is in the gallery.

Naturally the player handles MP4 videos up to 1080p. You have to be careful with the bitrate though, because higher bitrate 1080p videos might end up choppy.

The video player is somewhat of a letdown

The codec support is also seemingly a few years old with DivX and XviD nowhere in sight. You will have to either get a third-party app for playing those, which will inevitably harm performance or convert all your videos before uploading them to the Optimus Pad.

Thankfully, the Optimus Pad has Mass Storage mode supported, unlike the Motorola XOOM.

As you would expect from a device this size, the LG Optimus Pad offers nice and clean audio output. Save for the iPad, it could match or beat just about every other slate out there.

In collaboration with an active external amplifier the Optimus Pad produces perfectly clean output and pretty high volume levels. As you can see from the scores below, there's not a single weak part of its performance.

And there's not too much degradation with headphones in the picture either, except for the volume levels, which take a plunge. Stereo crosstalk does increase, but it's still better than most of the devices we have tested (including the iPad). In fact, if it wasn't for the only average volume level in this scenario, the Optimus Pad might have successfully challanged the title in this category. 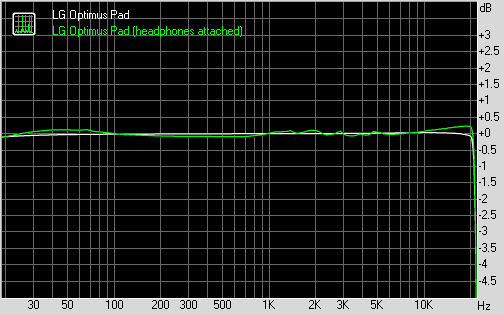