Vu from the top

The LG Optimus Vu comes in a fairly compact box that's designed to stand upright. Pull it open and you'll find the device wedged in a piece of foam to prop it up and the stylus just in front of it. It's a small touch but we quite liked the design of the box.

Behind the Vu is a small box with the manuals, but the rest of the good stuff is hidden underneath. You have to take out the foam piece to get to the compact charger, the microUSB cable used both for charging and data transfers, a single-piece headset with in-ear plugs and a SIM removal tool.

What we didn't find was any of the NFC stickers we're used to seeing recently - you'll have to get some separately.

The LG Optimus Vu borrows its design from the LG Prada 3.0 - it's clean cut and angular, with the same rounded metallic sides and patterned plastic back. If you liked the aesthetics of the Prada 3.0, you'll like the Vu too.

The proportions have changed, however. An outfit tailored for the Prada won't fit the Vu as the large 5" 4:3 screen makes the device look more like a small tablet than an oversized phone.

Continuing our tour around the Vu, above the screen, we find proximity and light sensors, and a 1.3MP front-facing camera for video calling.

The opposite end of the Vu's front has the four standard Android buttons in capacitive fashion. From left to right they consist of a Menu, Home, Back and Search keys.

The LG Optimus Vu's top side is a busy place. We have the 3.5mm audio jack, the QuickMemo button (we'll get back to it in the software chapters), the Power/Lock button, and the microUSB port (which is hidden under a sliding cover). It's actually an MHL port, so with the right adaptor you can use it for TV-out or as a USB host for external USB devices.

The Power/Lock glows when you unlock the device, but doesn't do so on a pending notification.

The secondary mic is also here along with something you often see on South Korean phones - a telescopic antenna. It's there to pick up T-DMB TV signal and it won't make it outside Korea. It's just that our review unit comes straight from the mothership and is a sample of what they have on the Korean market.

The buttons and connectivity port are strong design accents

The bottom of the Vu features only a microphone. Two screws in each corner give the device a sturdier, more industrial look.

The volume keys are located on the right side of the LG Optimus Vu. The little plastic knobs have a fairly low profile so they can be hard to find by touch. Surprisingly though, they have a very good press.

The left side of the phoneblet houses the microSIM card tray. There's a small hole in it to place the pin and eject the microSIM, but we found that we can open the flap even without the tool.

The back of the phoneblet features the 8MP camera lens and a LED flash, both of which are set on the same plate. The back is made of a patterned plastic similar to that of the Prada 3.0 and features two logos - "4G LTE" in matte print and the LG logo in glossy metal. The single speaker grille is in the bottom left corner.

The 8MP camera on the patterned back • The loudspeaker

The back panel isn't removable, but if we could take it off it would reveal a 2080mAh battery. It doesn't sound like much, so we ran our usual battery tests to find out just how long it can last under the load of a large screen and a dual-core processor.

The LG Optimus Vu scored an endurance rating of 37 hours. It lasted long enough in our 3G voice call test, but the web browsing and video playback times were average. The video playback time isn't particularly important (the 4:3 display good at displaying web pages, not widescreen videos), but the web browsing time feels a bit short. It does beat the Samsung Galaxy Note by over an hour in this category though, so it deserves some kudos for that. You can read more details about the battery life of the LG Optimus Vu in our blog.

The LG Optimus Vu is not a small device by any count. In fact, the wide aspect ratio makes it nearly impossible to use with one hand. That's not much of an issue though as the way the Vu is intended to be used is by holding it in one hand and using the stylus with the other.

You can, of course, use the phoneblet with two hands - its size makes two thumb typing very comfortable in both portrait and landscape orientations.

Let's look at the display a little closer. It has 1024 x 768 pixel resolution, the same as the first two iPads but on a screen about a quarter of the size. With a pixel density of 256ppi, the Optimus Vu won't win any awards, but considering you'll probably be holding the Vu further away from your face than you would a normal phone, that pixel density will suffice.

The screen is an HD-IPS LCD unit that boasts lively colors and great viewing angles. There's some contrast loss at extreme angles, but the screen looks great overall. It's pretty bright too, the only problem it has is that the blacks could've been deeper (they glow and keep the contrast level down).

The sunlight legibility isn't very good either, in no small part due to the reflectivity of the glass covering the screen.

Here's how the LG Optimus Vu did in our dedicated display test. You can learn more about the testing process over here.

We zoomed into the display using our digital microscope so you can get a better idea of how the pixels are arranged, and how big they are. Check it out: 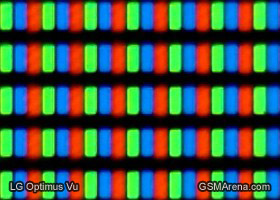 The Optimus Vu is impressively thin though - just 8.5mm with no elements protruding beyond this level of depth. And at 168g it's not too heavy either. So, while it probably won't fit in your pocket, it will easily slip into a bag or even a folder.

The LG Optimus Vu in hand

As far as build goes, the Vu feels very sturdy - there's just a small area on the back that gives way a little when you apply pressure but the rest is reassuringly solid. The metallic sides of the phoneblet are nice and the plastic on the back hides fingerprints well, but there's nothing in the way of premium materials here.

Here's the LG Optimus Vu next to its biggest competitor, the Samsung Galaxy Note:

LG Optimus Vu and Samsung Galaxy Note side by side

The Optimus Vu may have borrowed the hardware design from the Prada 3.0 but the software is more closely aligned to what we saw on the Optimus 4X HD. Except that the Optimus Vu runs Android 2.3 Gingerbread - head over to the next page to see how much that changes things.