Having just released its 5-inch Optimus Vu phablet globally, LG is hard working on its successor, as a specs leak reveals. The LG Optimus Vu II is a direct answer to Samsung's Galaxy Note II, though its specs sheet is hardly as impressive. 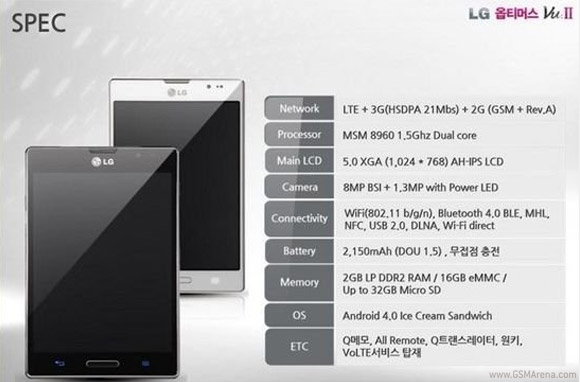 The LG Optimus Vu II will reportedly be powered by a 1.5GHz dual-core Snapdragon S4 MSM8960 processor and have 2GB of RAM. According to the leak, it'll be running Android 4.0 Ice Cream Sandwich on the same 5-inch, 1024 x 768 pixel screen with a 4:3 aspect ratio.

The battery of the second generation Optimus Vu is slightly bumped and will be 2150mAh instead of 2080mAh. Other than that, the rest of the specifications seem to be left untouched. There's no information on the availability and pricing.

However, we've already seen the new universal remote app LG is readying, so the Optimus Vu II will surely have more surprises up its sleeve.