LG Pay's White Card leaks out, will be required to use the service

We've known since October that LG is working on a payments service of its own, which should launch this year. However, unlike the payment solutions from Apple, Google, or Samsung, LG's entry into this field will not work through smartphones. In an odd twist, LG Pay will require a special "White Card" in order to be used.

This card can be seen in the leaked shot below. Size-wise, it's very similar to a normal credit card, and it isn't much thicker either. It is different, though, as you can see. The White Card will essentially hold information from multiple actual credit cards on it - so in this regard it's not that dissimilar from Apple Pay, Google Pay, or Samsung Pay. 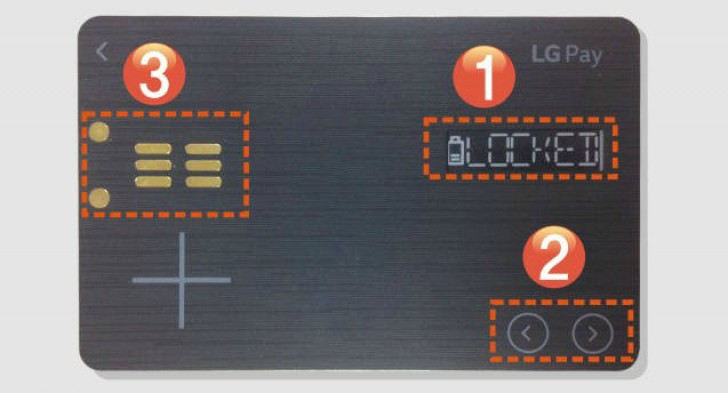 Marked with 1 above is a small built-in display that will show you the card you're currently using. The arrow buttons marked 2 will let you quickly switch between cards, while the pins seen at No.3 in the image will be used for charging the card. That is needed because this is after all an electronic device.

LG apparently thinks older people will be more likely to use its solution rather than go with one of its competitors' smartphone-based options, especially since one can use its White Card at ATMs as well as in stores. The payment service is set to be officially unveiled at MWC next month, and for now it looks like it's only going to launch in the company's native South Korea, at least initially.

LG has already pre-ordered 50,000 of these cards, and it's in active discussions with one provider for mass production of even more. Quite a few financial institutions and retailers from Korea will be involved with LG Pay, it's been revealed. And according to an unnamed representative for one of these partners, by next month most card companies in the country will have joined LG's effort.

Just a thought, but might the contacts at point 3 on that image also be a device to emulate Chip & Pin chips so this device can work in Europe (and anywhere else that system is used)? They seem to be in the right kind of position. That'd put...

Insert in atm, hacked the machine, get lots of money. Best function ever!