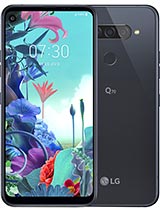 Anonymous, 02 Nov 2020It is true the phone "can" get slow. But, as long as you have a task killer download... moreTrue.. you want the phone to be smooth, you need to take care more..
it's not the system is managed by AI to do works for you.. be realistic

Brady, 17 Oct 2020Yeah I currently have this phone and omg is it slow. Do got to say very nice camera and lovely... moreIt is true the phone "can" get slow. But, as long as you have a task killer downloaded, I use AVG cleaner, the phone works perfectly. Also don't forget to clear out all this apps in the background, because they just waste previous memory you don't need. I've great thing about the cleaner is it'll tell you the battery drainers, as well as must days used, etc. Hope this helps.

I bought the LG Q70 to use with a drone that requires 5G Wi-Fi. I can't get the phone to connect to my drone controller at 5G Wi-Fi, it will only connect at 2.4G, it is a dual band phone. Does anyone have any idea why I'm having this difficulty ?

Anonymous, 08 Jul 2020This is the worst phone I've ever had. Bulky, and SO SLOW! Frequently skips around on it&... moreYeah I currently have this phone and omg is it slow. Do got to say very nice camera and lovely screen along with the design of the phone itself is nice and sleek and good storage what my God does this phone like to lag Skip and take 2 minutes to open a app when I'm watching YouTube and I switch between portrait and view it really likes to lag and that upsets me I don't think it's the chipset or the ram or flash memory I think it has to do with LG firmware programming and if LG sees this please fix it it would take most likely a simple update it wouldn't speed it up fully but it would be nice to have a faster phone as I said though it's a nice phone physically but something with the firmware it's fishy for all we know it could be a simple fix such as changing a 1 to a 0

Okay so here's a short review. I bought this phone few months back in Korea (around $390).

Snapdragon 675 ain't big shot but for an average user like myself it's quite enough for daily activities: call, message, music, web browsing and some gaming.... I compared to my friend's XSMax and Q70 is slower in gaming, but it's not that bad. For me the performance is acceptable for this price.

I'm not into taking photo so I can't give more details about the camera, to me it's okay, has manual mode and I can tune focus myself which is good.

Audio quality is awesome! With a decent headphone, the quad DAC really shines, it gives your music to another level. IMHO it deserve the best music-player-phone nominate (or any phones which have similar DAC).

Battery is good, there's no official testing from GSMArena but you can find phones with same specs in the table, I think they share similar battery life.

Update: Before buying, I was skeptical about LG would deliver update in the next decade or so. But yesterday I received an OTA Android 10 update. My neighbor asked me if I need medical support when I screamed of joy.

Pros: Brilliant audio quality (and 3.5 jack), high chance of survive in an apocalypse
Cons: The back is made of glass, I prefer something more durable, like vibranium. Since I bought this in Korea, it has some Korean characters here and there even I set the language to English (like the ringtones), and lock screen shows two clocks, one is my time zone, the other is Korean's, I can't remove the Korean's. It's annoying sometimes.
Conclusion: if you're a music enthusiast like me, and want a phone with decent specs enough for some lightly gaming, web and shit, then this phone is for you (plus it doesn't have Chinese scam apps). Or else if you prefer a beast with cheapest price possible and ditch everything else, there are tons of Chinese brands to select from.

This is the worst phone I've ever had. Bulky, and SO SLOW! Frequently skips around on it's own, It was "free" from Verizon with a two year contract. I thought I could work with it for two years but not going to be able to. I should have known a "free" phone would be exactly you-get- what-you-pay-for.

Should I get this or Galaxy A8?

Worst thing in mobile history that LG discontinued developing midrangers, and moved out of Eastern Europe baltic states.
They were ultra popular here.

I've had the Q70 since late September 2019 (South Korea) - the V50 was a bit out of my price range. Honestly, it's a really good phone for anyone who's not doing anything too heavy. The camera is great for the social media tendencies of the general population. The HDR is lovely and the wide angle is great for getting in most of a spectacular view. There's a 'manual' photograph mode too, for those of us who know a little bit more about taking the perfect picture. The selfie camera is pretty good - I don't tend to take a lot of selifes, but I do video call a lot, so for what I need it for, it's great.
Resolution is good for unintensive mobile games, the colour is really nice and I can't ask for anything more from the on-board speaker. There's a microSD card slot, and the headphone jack is a plus, too.

The device itself is weightier than perhaps other phones on the market, but I for one really like that. I like knowing that my phone is in my hand, or that I can feel it in my bag without having to go look for it. Battery life is great too. If I barely use my phone through the work day, I'm heading home at about 85%. If I spend a good chunk of time playing games during my breaks, I'm going home with about 70% at the end of a 7 hour work day.
Again, I don't do much with my phone beyond what a normal person does: social media, a few pictures here and there, online shopping, and games. So if you're looking for a powerful phone without the flagship price tag, I'd say this is a good option.

Anonymous, 18 Jan 2020Headphone Jack with high quality audio, SD Card slotI guess you're illiterate because I said "apart from the sd card slot". And ohhhh noooo a slightly better jack. 24 bit audio isn't gonna kill you. It's still better than the typical 16 bit audio from most other jacks. And it certainly isn't a big enough difference to get this over the vastly superior Mi 9T Pro.

joe nodden, 21 Oct 2019Are you kidding me? "Cheap chinese phones" have all that and more. Apart from the military cer... moreHeadphone Jack with high quality audio, SD Card slot

PKM1, 02 Nov 2019Chinese phones are cheaper but they are not reliable.I have LG Optimus One working excellent o... moreCheap LCD? I guess... x-x

joe nodden, 29 Oct 2019Really, "Tom" (mr I don't even have an actual account on here) last time I checked I'm not the... moreNah mate the IP68 and MIL-whatever- certs are for those who would like to avoid unexpected accidents that may damage their phones and data.

If IP68 rating is only about a cheap plastic rubber then we can see it's everywhere in every phone but no, usually it's available for flagship of some big brands (ie Apple, Samsung...). And beside that, phone has holes you know? audio jack, charging port, speakers and a bunch of buttons as well, so no IP68 is not all about the rubber seal, obviously it's not useless at all (or those CEOs are idiot trying to add a cheap, useless feature in their 1000$ flagships)

You mentioned drop test, that's very good. But 5 times in the corners (which is the most vulnerable part) is pretty impressive isn't it? And aside from drop testing, you should also included:

They're parts of the MIL-whatever-certificate. Now it doesn't seem to be so useless now does it? You should watch a youtube video to see the test environment and how they do it. It's kinda cool. LG or whoever conducts the test doesn't matter, it's global standard and they follow it, that's all.

Although I have been following gsmarena for years I just don't like the idea to create an account here, kinda waste of my time (like what I'm doing)

Well, people have their own priority so if you or any other who prefer to own a high specs phone to benchmark each other with lowest budget possible, then it's your choice and I respect that. While I would like to have a durable, reliable... device

Since there's no way for a non geek user to tell such things so the rating and certificate were created and accepted globally. And now someone to tell they're useless and not reliable, and prefer to trust some newly created Chinese brands; now which argument is more invalid?

Chinese phones are cheaper but they are not reliable.I have LG Optimus One working excellent on gingerbread and have changed three Chinese brands.One fall from the bed and they are gone

Total of 63 user reviews and opinions for LG Q70.
ADVERTISEMENTS