The long rumored LG Spectrum for Verizon just become official at the LG CES event in Las Vegas. We already knew pretty much everything about this monster, but it won’t hurt to go through its sweet-sounding specs once again.

LG Spectrum is another LTE-capable device coming to join the growing Verizon LTE family. It packs a 4.5-inch 720p HD IPS display (329ppi) and is based on the Qualcomm MSM8660 Snapdragon chipset featuring a 1.5GHz dual-core Scorpion processor, Adreno 220 GPU and 1GB of RAM. The specs sheet continues with an 8 megapixel snapper, 1080p video recording, a single-LED flash, a 1.3MP front-facing camera and 4GB internal storage accompanied with a 16GB pre-installed microSD card. 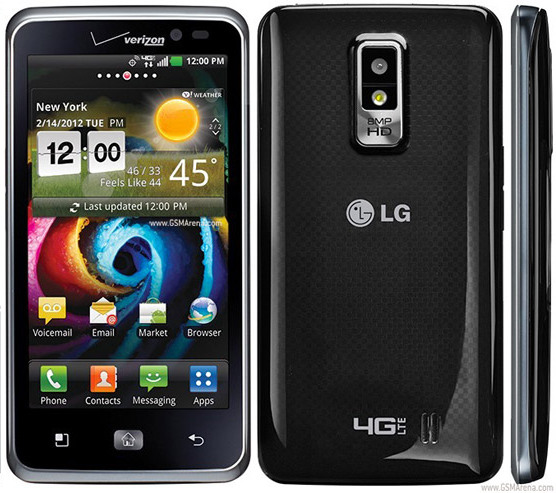 The connectivity has pretty much everything - the LTE network support, Wi-Fi a/b/g/n with Wi-Fi Direct support, Bluetooth 3.0, GPS with A-GPS and MHL microUSB port with TV-out capabilities.

LG Spectrum will feature ESPN's ScoreCenter app where it will get exclusive access to HD content, whilst all other phones will receive the service in SD resolution.

And here are a few live images of the the LG Spectrum. You can clearly see it's quite similar to the Optimus LTE gadgets and the AT&T-bound Nitro HD.

LG Spectrum will become available on Verizon from January 19 for $200 with a two-year contract (both talk and data plans required).

The Spectrum's display kicks the ass of all those phones (yes, even the Rezound, though the Rezound has an awesome display). It's biggest drawback is that it is LG. The Rezound does have four times the internal storage as well, and a much better came...