The LG Optimus LTE is already available in four carrier-bound versions - two for the Korean market, one for Bell in Canada and the LG Nitro HD for AT&T. It seems Verizon is going to offer the monstrous device as well, the rumors so far suggest the name LG Spectrum. 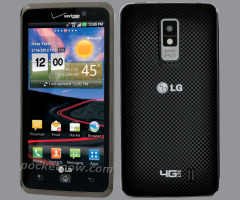 The Spectrum features basically the same specs as all the other Optimus LTE devices - a 4.5" HD IPS LCD screen, a dual-core 1.5GHz Scorpion processor, Adreno 220 GPU, 1GB RAM, an 8 megapixel camera with 1080p video recording and LTE support (simultaneous with voice) in addition to the rich connectivity options.

The date on the screen in the leaked photo is February 14th 2012, quite close to the MWC 2012, but we suspect the official announcement could happen on CES or even earlier.

By the way, we have the Optimus LTE LU6200 in our office. The Verizon Spectrum should look exactly the same, so here are a few live shots for you to enjoy.

We are going to prepare our traditional hands-on video soon and the in-depth review will come soon after.