LG had a phablet before the Optimus G Pro, the LG Optimus Vu, and two generations of it, at that. Now the company has put out its third iteration, and following its new naming convention it's just LG Vu 3 (no "Optimus"). 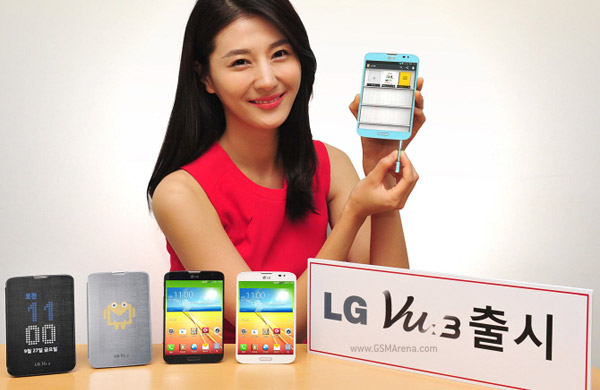 The LG Vu 3 drops the squarish looks of the first two iterations and goes for a more rounded look that is similar to the Optimus G Pro (but not the LG G2 - there are hardware buttons below the screen). The Vu family has always had 4:3 screens and this one is no exception.

This time around it's got a 5.2" IPS LCD screen of 1,280 x 960 resoluiton which results in 307ppi pixel density. LG claims this aspect is better for reading text (both documents and web pages). Like previous Vu's, this one works with a stylus with a rubber tip, and there's no additional digitizer for it.

Despite the lower screen resolution, the LG Vu 3 uses the same chipset as the G2 – a powerful Snapdragon 800 with four Krait 400 CPU cores and Adreno 330 GPU.

It has a 13MP camera too, though the press release makes no mention of optical image stabilization. The LG Vu 3 still borrows a few things from its G2 counterpart, including LTE-Advanced (up to 150Mbps downlink), KnockOn (wake device by double-tapping the screen), Guest mode and QLink (send notifications between the device and a tablet).

The LG Vu 3 also works with QuickView covers, but unlike the covers for the LG G2 there's no window. Instead the whole cover is translucent and the screen contents shines through.

The squarish phablet will be released in Q4 (if we're reading the Google Translated press release right), but there are no details regarding availability.

Well, I am using one. My other 2 friends is also using one. Its much convenient to use VU rather that a bulky tablet.

I applaud LG just for combining two things together: > 4:3 aspect ratio - excelent for reading books, magazines, spreadsheets, business documents, anything portrait. (Those who dislike the model are ususally landscape content consumers, games an...