There's quite a lot to the LG V10 - a flagship, a phablet, a camera phone, a rugged phone, a Hi-Fi phone and the first of the new V-series. It's a feature-packed device and its signature feature is the secondary always-on display and a dual selfie camera.

Until recently, the LG G4 and the G Flex2 ruled LG's lineup as co-flagships, but now there is only one king. In our preview we described it as "G4 on steroids" and the longer we spend with the LG V10, the more we are convinced this is an apt description. 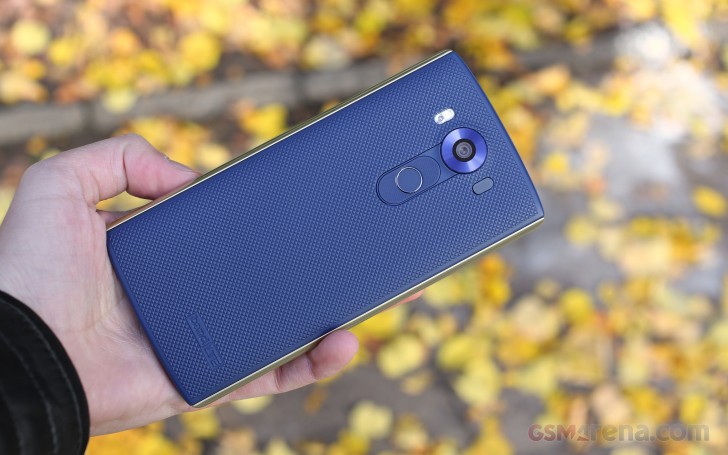 The secondary display is essentially one line above the main screen that can be left on 24/7 and serves for notifications and shortcuts. This is to the notification light as email is to Morse code - a much richer way to give you at-a-glance info of what happened since you last checked your phone.

We've seen secondary screens like this one before, but this is our first dual selfie camera. LG solved the problem of group selfies ('groufies') by adding a super-wide 120° camera, in addition to the standard 80° one. Many more of your friends can now fit into the shot.

The main camera is very impressive too, it features the most comprehensive set of manual controls we've ever seen on a mobile device. Even PureView Lumias and Samsung's smartphone/camera hybrids didn't have some of the settings available on the LG V10.

And then there's the fingerprint reader, the 32-bit Hi-Fi DAC and the premium headphones. Here's the short version of it, we'll do a deep dive into the top features of the V10 as soon as we're done with the intro.

The LG V10 provides a nice antithesis of the Galaxy Note5 and S6 edge+. Their sealed back compartments and glass backs (which double the chance of cracks when dropped) make them seem more vain than practical. Also, the Galaxy S6 edge+ does not use its dual-curved screen as a separate control like last year's Note edge did.

LG issues a serious challenge to other makers on the camera and audio battlefields with the V10. The phone is also LG's first to feature a fingerprint reader since 2009's GW820 eXpo (not counting the Google-designed Nexus 5X).

Time to get started since there's a lot of ground to cover. The bodywork on the LG V10 is quite complex, the software section has to explain why you need a secondary screen and the camera section has a couple of new terms to introduce to the world of smartphone photography.

Really cannot believe that this is the first ever flagship smartphone to have a dual wide/ultrawide front camera setup. It really is hard to believe that very few brands follow suit, especially when today's smartphone brands are more interested ...

I'd say either get another one or get a V20