LG found its voice with the LG G3. It would be the company that leads the push for extra-large screens for the everyday flagship. Phablets were already quite popular at the time, but LG threw away the distinction and it hasn't looked back since.

It would also beat everyone on sharpness by going QHD when most of its competition was still at 1080p. Since then it has lost ground. As great as the LG G4 was, it didn't have much new to say - it was curved like the G Flex a year before it, sometimes with a leather back like the Moto X (from 2013).

Samsung got burned when it attempted an element-defiant flagship and this year over-corrected with a phone that's both more fragile and missing some features. The Galaxy Note Edge's second screen functionality was mostly dropped and dual-curved screen on the S6 edge couple brings more aesthetics than functionality.

A perfect time to strike then. The LG V10 brings fresh energy and starts a new family line. The V series stands for practicality, durability and innovation. It's shock proof to a military standard. It's not waterproof like the Xperias, but it's a difference as small as the difference between 'every day' and 'vacation time.'

It's as practical as ever too, battery and storage are easy to refresh and if the back cover does get damaged it can be swapped out in under a minute. LG has done its best to make that unnecessary though. The tough stainless steel frame features silicone bumpers to absorb shocks, a scratch-resistant Dura Skin back cover and double-paned glass on the front. 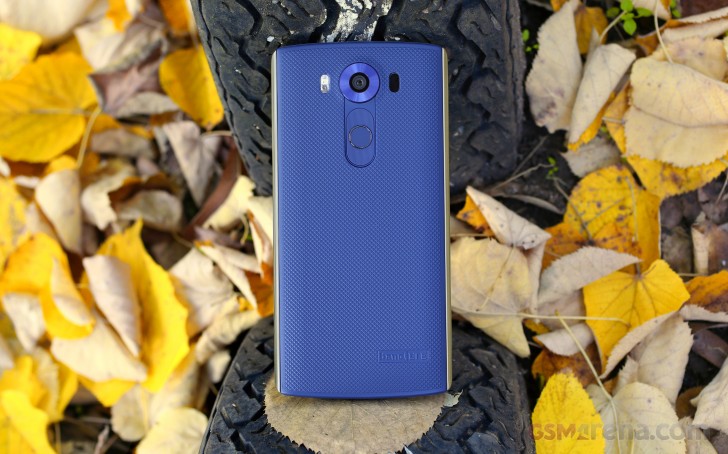 And it's not making the design suffer too much too like most rugged phones do. The only giveaway on the LG V10 is the extra grippy back texture, though we welcome that on phones from all walks of life. From the front it looks like a phone designed for beauty, especially the versions with bronze-colored sides (the all-black one looks a bit plain).

While QHD displays are now commonplace, the V10 brings a second screen, which smooths out the interaction with the phone. Everything from simply checking the time to switching between multiple apps is more seamless thanks to the second screen.

LG has been pushing its camera division hard. The G2 was an early entrant into the OIS field and G3 brought Laser autofocus. We were a bit harsh on the G4 earlier, but only because its camera was a massive improvement and we know it can do better. The new sensor and faster lens brought in image quality to match the advanced features.

Now the LG V10 improves on the camera software with features ranging from fun to ones requiring semi-pro experience. These days a popular YouTube channel can get more views than a top TV show and the V10 allows budding stars to drop their bulky DSLR setups (which cost many times what the V10 does).

Sure, the quality won't be quite the same, but the phone that's always with you promotes spontaneity. And you're not completely locked out of a choice of lens thanks to the two selfie cams. Also, the mic directionality control give you a choice between narration and observation.

The fingerprint sensor is overdue (the G4 should have had one), but a welcome addition to improve security. The G4 skated by with a Snapdragon 808 chipset, but for a late-2015 flagship it's a sub-par pick and our only major complaint.

The Samsung Galaxy S6 edge+ does not have a second screen like the Galaxy Edge before it. Still, the curved sides of its 5.7" QHD Super AMOLED are used effectively for notifications. The 16MP OIS prefers to stay in control, but the quality is great. As for the chipset, the Exynos is just clearly better. The Galaxy S6 edge+ is one of the most fragile smartphones on the market, though, given the amount of glass it employs.

Curvy screen gimmicks aside, the Samsung Galaxy Note5 and its S Pen stylus are an Android powerhouse. LG has come around and tried a few stylus-packing phones, but the V10 knew better and tried to differentiate with cool camera features and a second screen instead of entering a battle it cannot win.

While LG was ahead of the curve with QHD on the G3, Sony won the 4K race with the Sony Xperia Z5 Premium. The full resolution is used only in certain situations and it's questionable if you even need it, but you'll certainly brag about it. Many don't even have 4K TVs yet.

Also, Sony found a way to use Snapdragon 810, it waterproofed the phone (just don't use it under water) and its new camera performs great during the day. The hybrid stabilization setup was impressive too.

The Huawei Nexus 6P gets its 5.7" QHD AMOLED screen from Samsung and with the right app you can have power-efficient on-screen notifications too. This one is enveloped in a premium aluminum body (a first for a Nexus) and packs a 12MP camera with large pixels. Huawei also found a way to incorporate S810.

Having a pure Android experience from Google is a relief for all those scorned by delayed or cancelled update plans.

If you do like your software directly from the source, the Microsoft Lumia 950 XL is another great 5.7" QHD AMOLED option. It has a heavy focus on camera too with Zeiss lens, PureView sensor and OIS. The software lacks some of V10's more advanced features, but the Lumia team has been leading smartphone camera innovation for a long time now (it introduced manual controls for one).

Also, the Snapdragon 810 chipset is water-cooled (see, LG, there's a way) and with the right dock (given away for free in some regions) you can turn the Lumia 950 XL almost into a full-fledged desktop.

For the next couple of weeks (until November 15) US LG V10 units come with great gifts - a 200GB microSD card and an extra battery with a charging cradle. What about after the promo runs its course? Well, for one it's $100 below the 32GB Galaxy S6 edge+ in the US and it comes with double the storage (much more if you score the 200GB card).

The LG V10 is an attractive, durable phone with great specs (save for the chipset), it comes with useful feature you can't find anywhere else and LG didn't overprice the phone (like Sony and HTC often do). We feel that the company will move many units, though some murmurs from South Korea suggest the market's reaction is different. Regardless, LG made a great phone and deserves a win.