The Velvet is a significant departure from the LG design language we're used to seeing in the premium segment. That's not to say it isn't the usual glass and aluminum slab, it's just a different one than previous V and G series efforts. 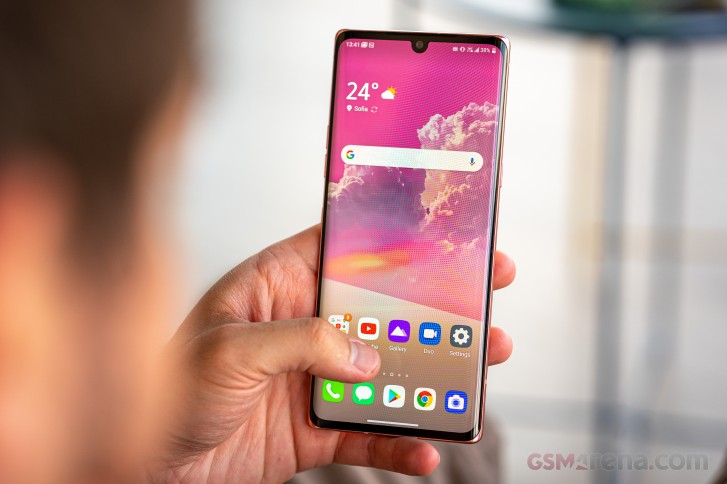 Let's start with the curved display. LG has so far been reluctant to take that route, instead opting for mostly flat panels on even its most expensive models, with Samsung, on the other hand, having no high-end handset with a flat screen. 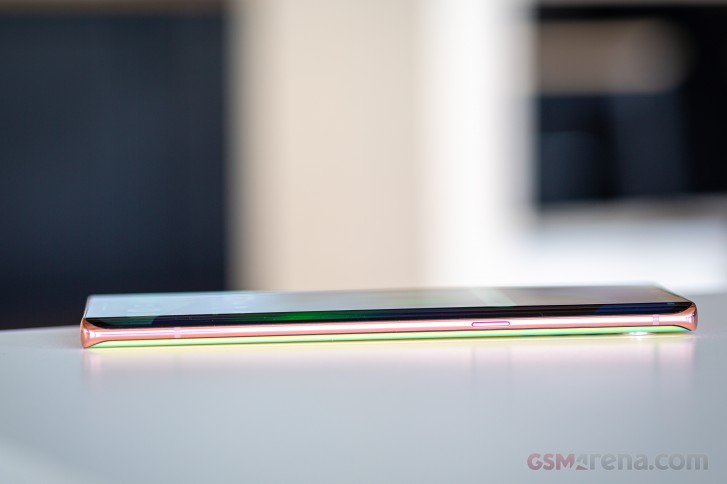 It's a gentle curve on the Velvet, not a dramatic waterfall-style one, though if you're of the firm belief that curved screens are the worst, this LG won't be for you. Not that we had issues with the edges in terms of touch input.

The Velvet's screen has thin black bezels on the sides. The top and bottom ones are slightly thicker, but identically sized between the two making for a nicely symmetrical look. 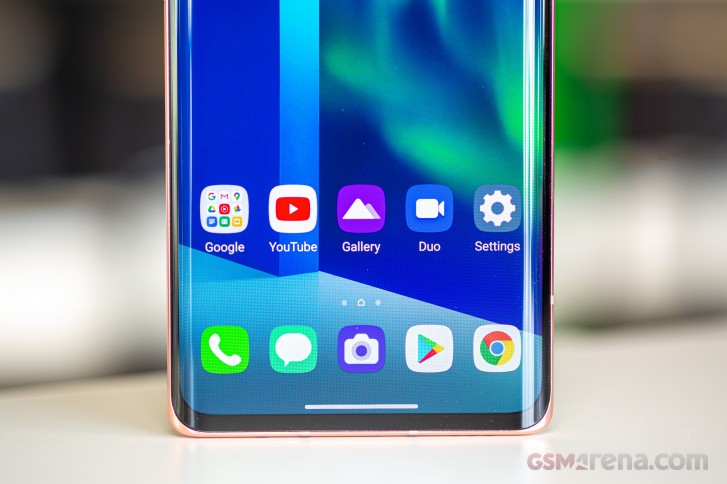 That's if you don't count the selfie camera cutout, of course - a U-shaped notch that's one of few minor eyesores on the Velvet. The top bezel does house a few other bits, too. The earpiece, which also serves as a second speaker, gets a thin slit notched out of the front glass and to its right you'll be able to spot the tiny windows for the ambient light and proximity sensors. 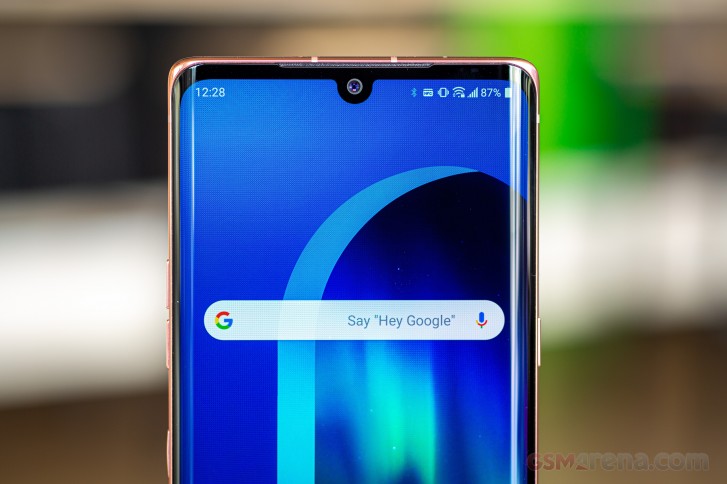 The fingerprint sensor is below the display and it's the optical type. We were initially met with a very low success rate when trying to unlock with it, which isn't typical of optical fingerprint readers. As we spent a couple of days with the Velvet, however, that experience improved dramatically - whether it's down to us getting used to the slightly lower position of the sensor, or the phone building a larger and more detailed map of the fingers, we can't know. Point is, it works. 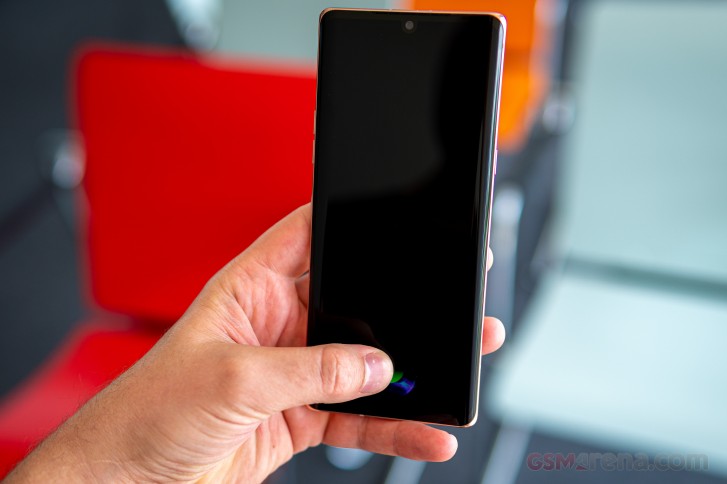 Flip the Velvet over and you'll be met with an explosion of hues. Our review unit is the Illusion Sunset colorway and we appreciate LG not trying to call it one single color. It's mostly pink, until you tilt it to reflect light directly at you when it becomes golden-yellow, but there's also a deep bluish-purple underneath waiting for the right angle to reveal itself. Perhaps that's the velvet right there.

All of that color overload comes on top of the fact that the back of the phone, at least on our review unit, is about as reflective as an actual mirror. 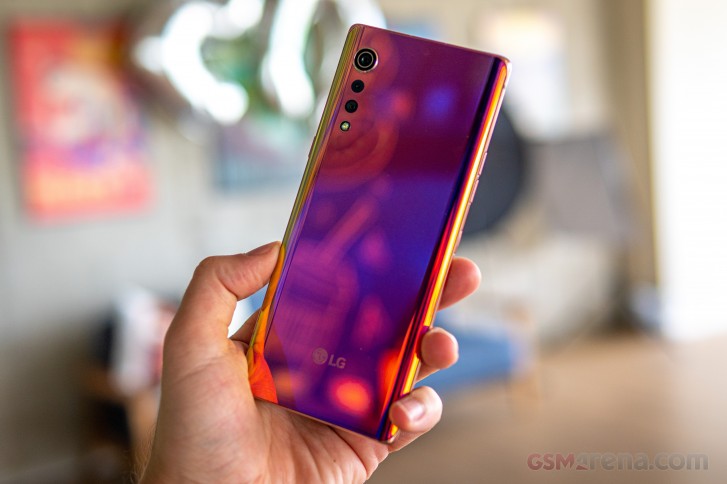 The other color options don't look quite as dazzling but then again neither does this one in the official pictures, so who knows - maybe one of the four Auroras is even more of a stunner.

Once the temporary blindness wears off, you'll see the camera array and that too is a new arrangement when it comes to modern-day LGs. They call it a 'Raindrop camera' and maybe, just maybe, now that we've told you that, you'll see it. Somehow we don't immediately recognize it as a raindrop. 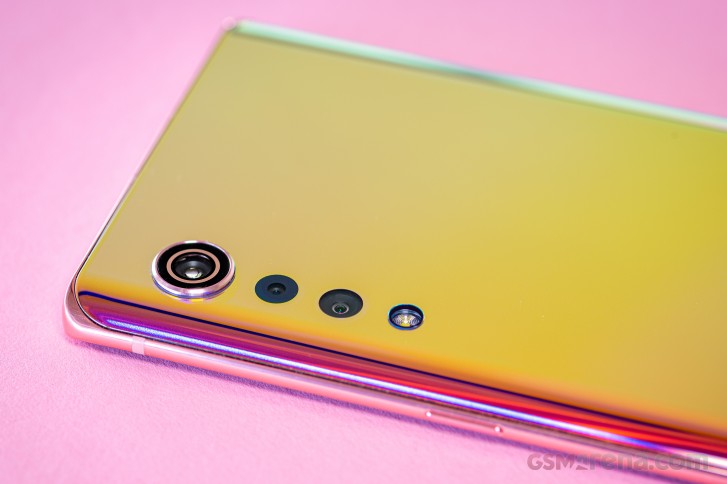 Each of the three cameras sits on its own, the biggest one at the top also sticks out a bit. Two smaller ones follow below, flush with the glass, and then finally, the LED flash is given a cutout in the panel. Previously, high-end LGs had their cameras arranged horizontally, but not the Velvet.

'3D Arc design' is part of the design philosophy, and it manifests itself not only in the curved screen, but also the back. The rear panel is symmetrical to the front and the two pieces of (unspecified) glass meet in a thin aluminum frame. This does mean the Velvet requires some finger gymnastics to pick up from a table, but on the way from your pocket to your hand and then on, handling is a non-issue. 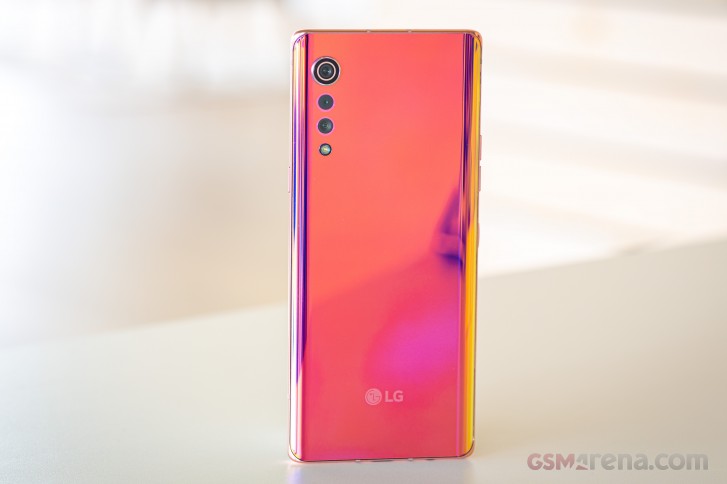 Which brings us to one peculiar realization we had when we first picked up the phone - the Velvet is tall. Not in a bad way, not problematically tall, just even taller than what we've been getting lately. We had to double check its screen aspect ratio and at 20.5:9 it is, indeed, a bit more elongated than an otherwise comparatively-sized Galaxy S20+. 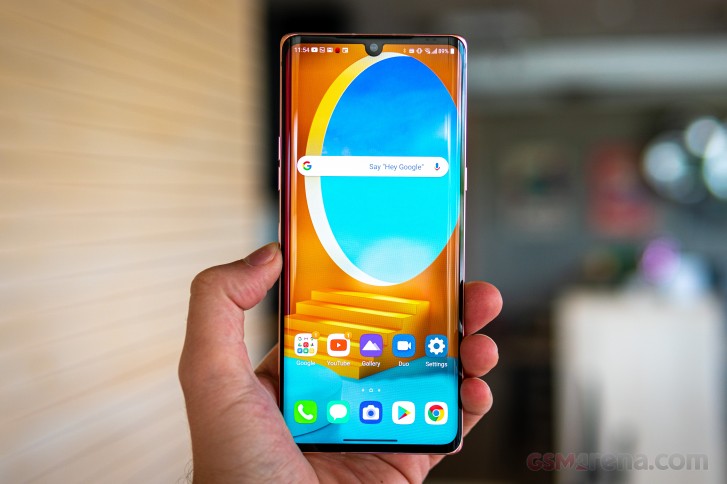 The Velvet measures 167.2x74.1x7.9mm and that's a good 5.3mm more along the y-axis than the Galaxy, but just 0.4mm wider. The Velvet weighs 180g and that's actually modest for a phone with such a large display.

Comparing to both the Motorola Edge and the OnePlus 8, the Velvet is noticeably taller too - 5.6mm more than the Moto, 7mm more than the OP. The Edge is thicker at 9.3, while the OP with its 8mm waistline remains the most compact of these three. 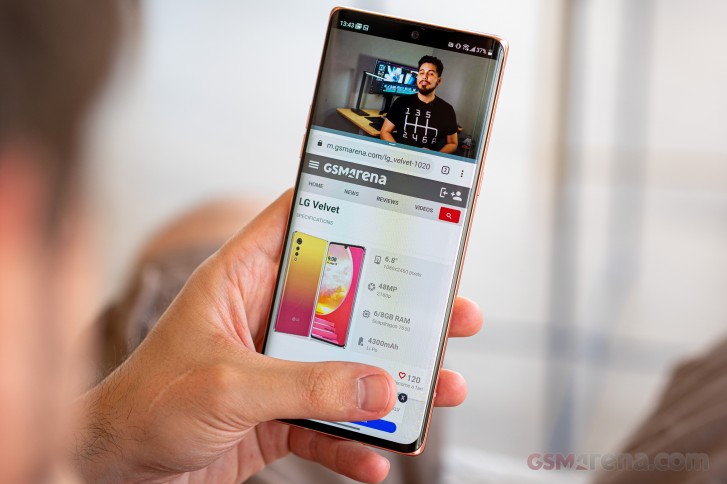 The controls layout, for one, has been carried over from recent models. The power button is on the right, some two thirds up the height of the phone. Two discrete volume buttons sit directly opposite, on the left side, and a Google Assistant key is a centimeter below them. All of the buttons are generously sized, well positioned and click very positively. 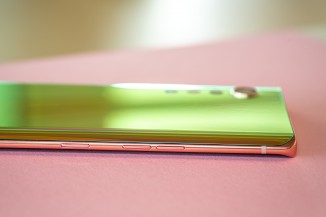 Power button on the right • Volume and Google Assistant buttons

Down on the bottom of the Velvet, you'll find the USB-C port and also a headphone jack. LG has been among the 3.5mm jack holdouts and continues to include it even on premium handsets. There's no mention of the famed Quad DAC in the Velvet literature, however. Speaking of audio, the main loudspeaker is also in these quarters as is the primary mic.

The SIM cards go in the tray that's accessed from the top plate. Our review unit takes a couple of nano SIMs or a nano SIM and a microSD card. There's a gasket lining the border where the tray meets the midframe, too. 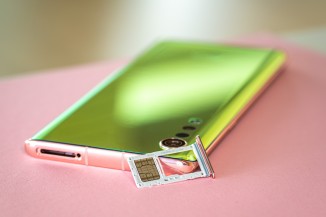 LG's made sure the Velvet gets compared to flagships when it comes to dust and water resistance and the phone carries an IP68 rating. The military standard MIL-STD-810G also gets thrown around in promo materials, as with previous LG handsets. The thing is, that's a widely encompassing standard containing numerous tests and while it does make it sound like the phone is more durable than others, we remain skeptical until we see more specific data. 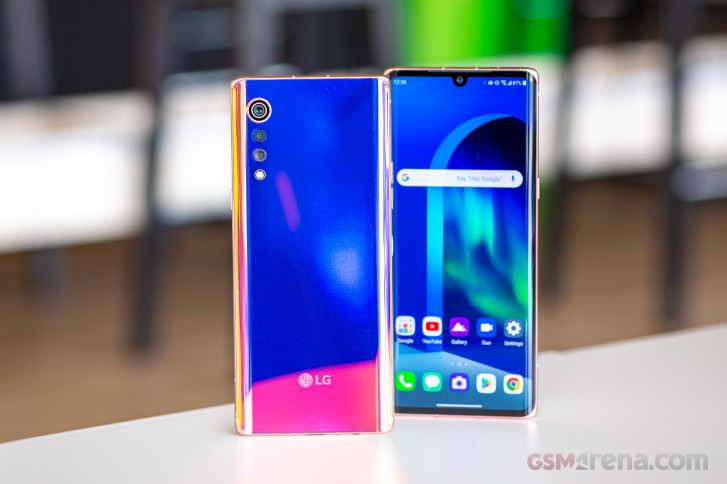