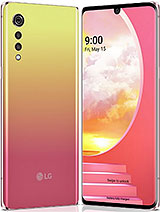 I just realized something: How come this phone, with the same 6.8" screen and Snapdragon 765G chipset as the LG Wing 5G but with a bigger 4,300mAh battery, scored less battery endurance rating than the Wing 5G? Could it be that LG has properly optimized the chipset for the Wing 5G but could not make it for this phone? That is a possibility right there.

Steave Pham, 08 Aug 2021Yes, mine is the same, sometimes my lg velvet 5G turns on Bluetooth automatically, nothing mor... moreI have android 11 for months now, i am on july security patches

Sasa, 02 Aug 2021I never had any problem like that. Sometimes i have onli\y issue when bluetooth turn on by its... moreYes, mine is the same, sometimes my lg velvet 5G turns on Bluetooth automatically, nothing more. Everything left is fine. But it doesn't receive the update 11 android.

Dontworryboutit, 03 Aug 2021Garbage phone dont get it. Besides the charging port constantly crapping out and it no longer ... moreI think that u just wanna advertising Apple, because everything u said is a lie. I am using this phone over a year, never had probpem like that. This is also middle range phone, so u can not expect Lg v60 experience. Phone is good for daily use.

Garbage phone dont get it. Besides the charging port constantly crapping out and it no longer sbaps in the charger to stay going here is also a problem where your phone constantly glitches preventing you from deleting any previous opened apps so they all rub at once unless you restart this really awful phone. At this point (3 phone replacmemts for said problems) im going apple

Shannon, 31 Jul 2021Does anyone have issues with the phone making calls while you're in conversation with som... moreI never had any problem like that. Sometimes i have onli\y issue when bluetooth turn on by itself. Nothing else.

Does anyone have issues with the phone making calls while you're in conversation with someone. I always turn my screen off when using up to my ear but this one seems to turn itself back on. Any mistouch protection like on the Huawei phones. I am looking for any help on touchscreen sensitivity I can't seem to find anything in the phone to adjust

Mido, 14 Jul 2021I would like to know if the Korean version of LG Velvet (LM-G900N) can come with dual sim cards???No. Single SIM and memory card only.

Just got my update in EU with july security patch. That never happened before, they were always a month late, but now, wow. Strange xD

I would like to know if the Korean version of LG Velvet (LM-G900N) can come with dual sim cards???

Anonymous, 05 Jul 2021the main lens that LG use for this phone is samsung S5KGM2 exactly same lens on phones ... morethere is places selling this model for more than 430$ for starting price

also sd765 have so close specs to sd690. there isn't so much diff btw them

the main lens that LG use for this phone is

so from the side of camera...it's compeletly ordinary type...nothing impressive about camera at all

Bootyman, 11 Jun 2021Got a new S21 Ultra, I have that same issue. It's an Android issue.I am looking for it , looking for someone to sell me the velvet

check the cameras, OP8 and OP8T are way worse.

Anonymous, 02 Jun 2021Lg velvet 4g vs oneplus 8? Almost same price. OP8 has a much more powerful SD 865 processor, a better camera, and a higher screen refresh rate. You buy the Velvet 4G because you deeply value microSD card, headphone jack, and FM Radio. If you don't care about any of them, I would skip the OP8 and go for OP8T.

Shiblee, 12 Jun 2021Hi...if anyone can help me who is using LG Velvet 5G single sim version ...can I use microSDX... moreNo, you can't. It's software limitation i guess. There's 2 slots, but only one is for sim card.

asixyearold, 12 Apr 2021My wife and I have had 4 of these LG Velvet 5G phones. 2 originals and 2 replacements and I&#... moreYou got the T-Mobile version? Well that fully explains it. T-Mobile Velvet 5G runs on Mediatek Dimensity 1000C chipset, not the usual Qualcomm Snapdragon 765G.