Under the hood, the Watch Urbane is a lot more similar to its predecessor than you might think. The round display, to start with, is borrowed from the G Watch R.

The LG Watch Urbane and G Watch R side by side

This, however, is no reason to complain. The 1.3-inch P-OLED pane is a pleasure to look at and can be considered the benchmark for round-face wearables. It offers a resolution of 320x320 and a pixel density of 246ppi, which makes for nice sharp images. 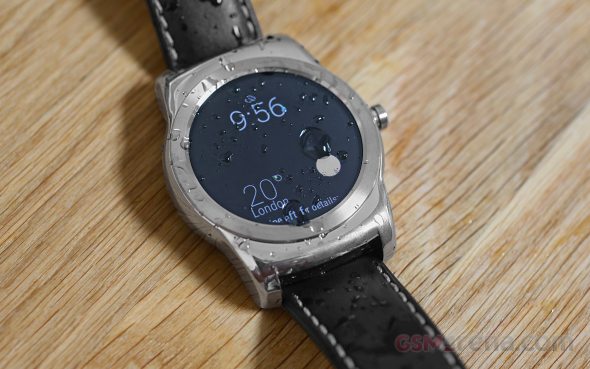 Being an OLED means the contrast is outstanding due to the black pixels using no backlighting at all and the colors are punchy. It's also quite bright.

Side viewing angles are fine and although reflectivity is still a bit of an issue, the screen seems to behave slightly better outdoors than the G Watch R. Rather disappointingly though, there is still no Gorilla Glass or sapphire covering the display. Third-party solutions are available so, if you fear getting your watch scratched, it might be a good idea to pick up a protector.

The display of the watch is gorgeous

The Watch Urbane does, however have one notable new feature, built in Wi-Fi. This will surely be a big one for Android wearables, as it makes them a lot more independent of your smartphone. The Watch Urbane can now receive notifications even If it is not within Bluetooth range.

The new Wi-Fi feature is definitely interesting, but has also sparked a lot of controversy. As it turns out, the older LG G Watch R does, in fact, have the required hardware as well but for one reason or another, LG refuses to enable Wi-Fi on the device. The official explanation is that the device never got its certification for the Wi-Fi radio, which is impossible to obtain at this point. But, understandably, a lot of users are viewing this as a cheap trick to convince prospective buyers to skip straight to the new model.

We'll just have to wait and see how the whole thing gets resolved.

Seeing how the LG Watch Urbane is equipped with the same 410mAh battery and has the same screen as its predecessor, one could only assume that it will consume just as much power. This is mostly true, as long as you opt to use WiFi sparingly.

Even with the always on feature, we managed to get about two days of average use from the device. Even if pushed harder and with WiFi on, it is capable of getting through the day, which is what's expected from it by today's standards. Which is to say, it's competitive but hardly exceptional.

The Watch Urbane looks a little too chunky on the wrist

We also have to note that the Bluetooth module in the Watch urbane has been bumped up to version 4.1, which is a bit more power-efficient. Still, be mindful of the WiFi. On the flip side, charging is quite quick. The dock tops up the little battery in around 30 minutes, which you will probably find an opportunity to sneak in even during the day.

Overall, we really see the LG Watch Urbane as a refinement of the G Watch R and this is more of a compliment than anything else. The new wearable aims to build on the sufficient popularity of the predecessor while experimenting with a different styling.

This is really crucial if smartwatches are to really make a difference beyond a small market niche. Also, LG hasn't exactly skipped on innovations either and is once again at the forefront of Android Wear development.

Follow us to the next part to find out what new software tricks the Watch Urbane has to offer.