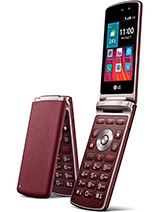 AnyONE know, if we can make hangout/IMO/SKYPe calls from this flip device..

Nairu, 28 Sep 2015Hello, I want a phone just to make calls and use whatsapp, nothing else. Will this phone fullf... moreyes it will

Hello, I want a phone just to make calls and use whatsapp, nothing else. Will this phone fullfil my needs? Thank you :)

Where can one buy the English version?

Why don't you (gsmarena) have the LG Wine D486 in your database. It is the best Android clamshell available in the market.

like the flip androids. Finally a flip android for the older folks that find the touch phone difficult to manuever

blob, 06 Aug 2015is the phone gonna be available in Asia/Philippines? Check it on LAZADA.ph but its the Korean version

I would like to know when/where we can purchase,

Finally (!!!) a phone to replace my 7 years old Nokia E66 which started to slowly fall apart. Lot of details about the phone is missing (LTE bands?, battery life?) but it has modern OS *and* keyboard, what nobody offers these days. Only thing I'm missing is small outside display for clock and notifications. (and I won't have to worry about display scratches)

I'll this phone for my mum.

Seems like a cool phone to have if it's priced correctly. And you can't really compare it to the Galaxy Folder. The Lg will probably be much cheaper.

Anonymous, 06 Aug 2015anyway 3mp camera, then why don't you fuse the battery too.1700mah for this phone is really great.

is the phone gonna be available in Asia/Philippines?

anyway 3mp camera, then why don't you fuse the battery too.