LG Electronics posted its Q1 financial numbers and it had the best result in almost a decade. Sadly, the Mobile Communications division wasn't a big part of that as its revenue only rose 2% YoY.

Total smartphone shipments were up 10% on a yearly basis to 14.8 million units. It was mostly mid-range smartphones like the K-series that bumped those numbers. Because of the slow LG G5 sales and the niche LG V20, the division still lost KRW200 million or $176,000 between January and March. That's still huge progress over the previous quarter that saw the mobile division bleed over $1 billion. 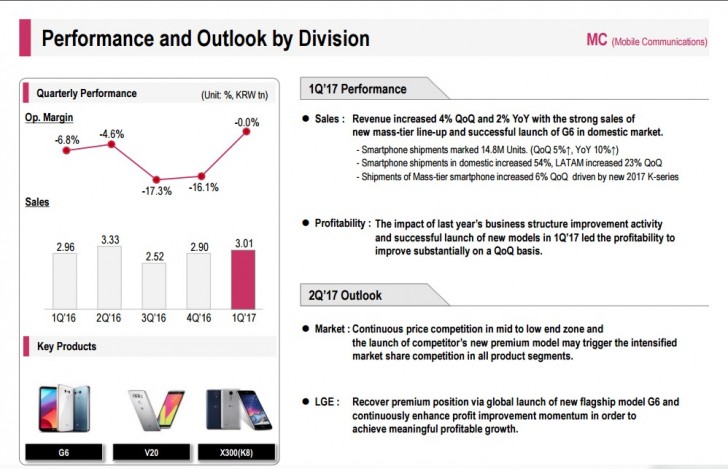 LG’s expects to post profits in Q2 2017 thanks to the LG G6. The company realizes that the competition in the mid-end class is fierce, but it expects to maintain its position there.

Consolidated operating profit reached an 8-year peak of KRW921.5 billion, or about $811 million, so it's great news for the company. Here's hoping that the Mobile division goes back in the black next quarter as well.

LG's achilles heel was when bootloop issues starts to appear on G4 series, but before that I never had a problem with my LG's Optimus G Pro 2.

You can easily fix a bootloop, just try this: 1- go to xda and look for an application for Windows called LG flash tool 2014, installl it as well as your LG drivers for windows 2- there is a website that you can look on google maybe called LGrom....