Both Samsung and LG are testing the waters for a mobile phone with a projector but there's a third underdog competitor - Logic Wireless and their Logic Bolt, which recently got updated with slightly improved specs.

The Logic Wireless Logic Bolt v1.5 offers quad-band GSM support with not one but two SIM cards. It has a 2.6" QVGA screen, which might or might not be a touchscreen - the Logic Wireless website is very stingy and ambiguous when it comes to information.

For example, the "TV & FM Radio" section of the features page says "Watch TV and play FM Radio". This video presentation is a bit more affirming, claiming both a touchscreen and Analog TV:

We know what you're thinking - dual SIM and Analog TV and those looks equate the likes of the exquisite NOKLA brand. Strangely enough, Logic Wireless is actually a small 19-member team based in Arizona. 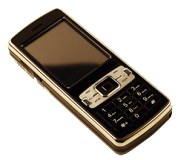 The Logic Wireless Logic Bolt offers Word, Excel, PowerPoint and a PDF viewers, a 3MP main camera and a 1MP video call camera, up to 3 hours of talk time and up to 250 hours of standby. There's a composite video and VGA inputs, though we assume they would need some sort of adapter to pull that off (seriously, if that kind of information isn't in the Features page, we are not quite sure what should go there).

yeah, not a fan of chinese things, MADE in China is one thing since its usually made to specs of a higher manufacturer, like my made in China Nokia, or my Nikon camera system parts made in China have served me well, but made in China to low Chinese s...

Go and buy a Nokia.