The Huawei Ascend P7 is just a year old, but is still a solid offer. It definitely got outshined by the Huawei P8 with its exquisite premium build and stylish exterior, but the P7 is still a charmer, not to mention way more affordable. Now, the handset is getting one step closer to its successor with a shiny new Android Lollipop update and EMUI 3.1 to go along with it.

One of our readers has tipped us that the update is almost ready for a major release. As a final, test before going public, Huawei has launched an open beta, with invitations already extended to P7 owners in Italy and Spain. A while ago, we reviewed the Huawei P8, which gave us a first glimpse at Huawei's new and highly-customized Emotion UI shell. 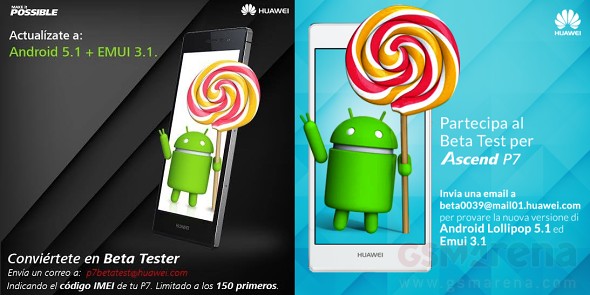 If you happen to be eligible for a beta test and get your hands on the EMUI 3.1 ROM for the Ascend P7, we would love to get some feedback on how well Huawei has managed to carry everything over. And for a more in-depth exploration of EMUI 3.1, check out the interface section of our P8 review.

Thanks for the tip JamesRH