UPDATE: Samsung phones are harder to repair than ever before, iFixIt tears down the Galaxy S7 (S7 edge too!)

UPDATE: iFixIt has posted the Galaxy S7 edge teardown as well. The S7 edge gets the same lousy repairability score as the Galaxy S7 did. Check out both phones in the source links below!

Ever since Samsung’s days of removable batteries and hyper-glaze plastic, Samsung’s Galaxy phones have gotten more and more difficult to repair. This time around, the Galaxy S7 scored a low 3/10 for user repairability.

Compared to Galaxies past, the Galaxy S6 had a score of 4/10, the S5 scored 5/10, and the hyper-glazed Galaxy S4 scored 8/10 as pretty easily repairable. These phones are becoming more and more complex and harder to repair now. 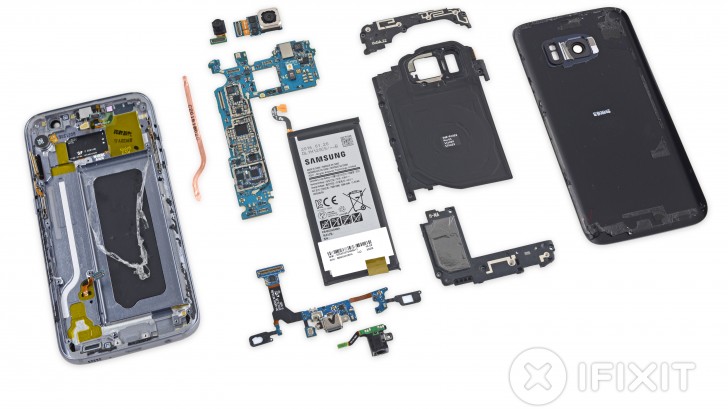 The good news is components are separated better and not stuck together to the midframe as was the case with the Galaxy S6. The bad news is, well, good luck getting into the device. The only way to gain access to the S7’s internals is by removing the rear glass panel, which is a feat all by itself.

Heat is needed to remove the adhesive that keeps the glass on the back. At this point, you’re five hundred times better off buying an insurance plan for your device in case the screen shatters or the components fail (looking at you, Galaxy S4).

Just make sure you all get cases for your new Galaxy phones!

I bought the original Galaxy Note (and repaired it myself a couple of times already) but if they keep making garbage with glue in it that can't be opened, I think I will either stick with the last model that can still be repaired or just dump Samsung...

Some of them are probably marketing employees for those companies who want to push for the unibody battery change rip off market scheme. While the rest of them are just low critically thinking tribal minded people who swallow all that marketing hogwa...