Sony has regularly been criticized for its support policies, leaving behind mid-range models and taking its time with flagship updates. The entire Xperia Z lineup has been promised the Lollipop update, though, and the company is slowly delivering. 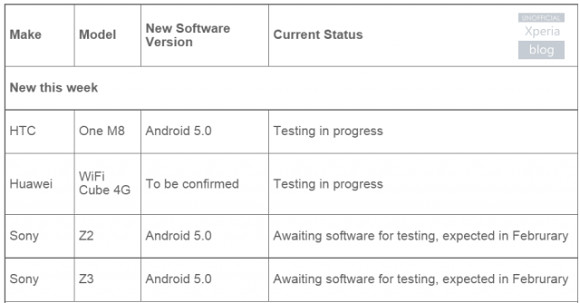 Vodafone Australia has confirmed that the Android 5.0 update for the Xperia Z3 and Z2 is nearing, with the carrier awaiting the software for testing later this month. That would likely push the actual release to March for Vodafone branded devices. Stock firmware Xperias should receive the update somewhat earlier.

The HTC One (M8) update, mentioned in the Vodafone document, is no headline news to us, as we've already witnessed it seeding in India and Europe among other countries. Still, Aussie folks should expect it anytime soon, as it's already in the testing phase.

Android 5.0 has finally worked its way to the OS distribution chart this month, and with more manufacturers catching up, we should see it climb up the ranks in following releases of the chart.

My Sony Xperia Z3 stuck in airplane mode since I'm updating to the latest one. I'm really hoping that Sony will be updating the software very shortly because Im so frustrating right now. Please hurry....

By the time you get ready for lollipop android 6 will be out!