With Nokia World fast approaching more and more upcoming Windows Phone 7.5 Mango devices getting their noses out of the closet. First it was the Nokia Sun, which was leaked from an Orange France roadmap and now it's the Nokia 710, found in Nokia's own Developers site by MyNokiaBlog. 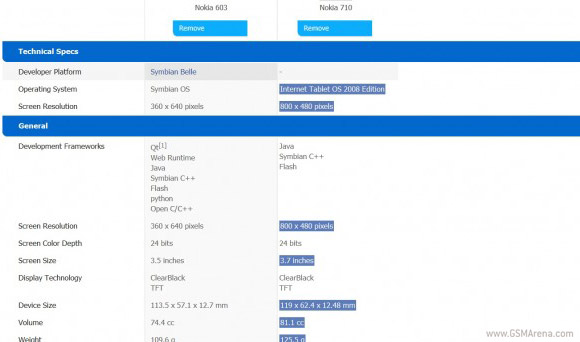 Luckily, they managed to take a screenshot of some of the specs list before Nokia fix their error and remove the device from the site. Interestingly, the device is listed to run "Maemo Internet Tablet OS 2008 edition", but the facts tend to make this Nokia 710 more of a Windows Phone Mango material.

The Nokia 710 is going to feature the same size 3.7-inch TFT 480x800 pixels display like the Nokia Sun, but unlike it, it'll be powered by a ClearBlack technology, rather than AMOLED. Under the hood, the processor is said to be a single-core Cortex A8, clocked at 1.4GHz with 512 MB of RAM and 8GB of internal memory, expandable with a mircroSD card.

At the back the 710 will sport a 5 megapixel camera capturing video at 720p with a 28mm wide-angle lens. You can also expect the usual array of connectivity options like Wi-Fi and Bluetooth. The device will most likely be announced at the upcoming Nokia World event in London scheduled for October 26. Will we be there? You bet!

At times we take a very complex view of things. Smartphones are supporsed to make life simple & barring a few geeks (may be 5-10% users), most people dont even end up using bulk of the functionality. An average Joe just needs a few basic apps to ...

yes.. these hacker ur talking about IS google and its what makes android so good today

u make an excellent point here... it does make me wonder