Huawei had a “one more thing” moment at its event and it brought the largest gaming phone yet – the Mate 20 X. The Mate 20 RS Porsche Design also took the stage to bring the usual high-priced flair.

With a 7.2” screen, we hesitate to call the Huawei Mate 20 X a phone. Semantics aside, it’s a flat OLED panel with 1,080 x 2,244px resolution and a teardrop notch. The X is a mix of Pro and non-Pro features in more ways than one.

Huawei is also targeting Samsung’s Note flagships with the introduction of the M-Pen. The screen can sense up to 4,096 levels of pressure with one, but if large-screen note-taking appeals to you, you’ll have to buy the accessory separately. Worse yet there's no slot for it in the phone. 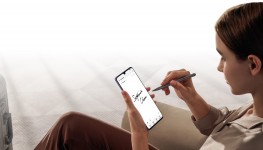 A huge 7.2" flat OLED display • Which supports an M-Pen stylus

Back to gaming. The Kirin 980 chipset is the first to use the powerful Mali-G76 GPU, which is 50% faster than a G72. Huawei’s GPU Turbo 2.0 tech promises fast, smooth game play.

And to keep that promise, the Mate 20 X features Huawei Supercool – the company’s name for a vapor chamber cooling with a graphene film heat spreader.

If the large screen sounds enticing for multimedia use, the Dolby Atmos stereo speakers seal the deal.

The X has the biggest battery in the Mate 20 family,too, with a 5,000mAh capacity. 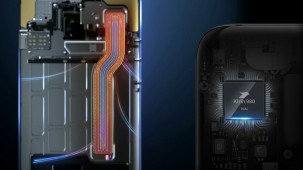 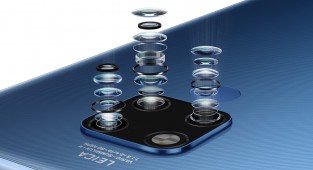 Huawei Mate 20 X uses the more advanced triple camera of the Mate 20 Pro instead of the Mate 20's slightly downgraded setup and it’s €150 cheaper than the Pro. This makes it the cheaper way to get the 40MP quad Bayer sensor, plus the 3x optical zoom of the 8MP telephoto camera and the 20MP ultra-wide angle camera.

You can take extreme close-ups from just 2.5cm / 1in and rely on AI for some creative photo and video effects.

The Huawei Mate 20 RS Porsche Design is a swankier version of the Mate 20 Pro. The back is clad in leather with a vertical strip of glass holding the Leica triple camera, it’s almost like a racing stripe.

Note that this is handcrafted genuine leather we’re talking about here, you’ll find out why when you see the price. It’s available in Black and Red (the glass is always black). 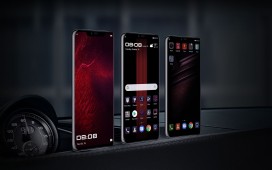 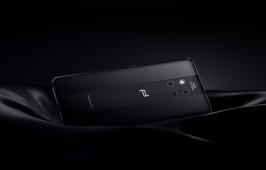 The Mate 20 RS Porsche Design is all about looks

The Mate 20 RS lives up to its race car aesthetics with high performance parts. The Kirin 980 chipset has next-gen CPU and GPU. Then there’s the charging – 40W wired SuperCharge and 15W wireless charging to fill the 4,200mAh battery.

Security is provided by a 3D face scanner and an in-display fingerprint reader.

why don't they try to be creative? why don't they just move their phone Chin up of the screen so they don't need to create a notch design? Why ALL OF THEM need to follow & copy Apply crappy design??

With the waterdrop notch you will loose a picture id feature....

I cannot believe people is still complaining about the Notch when EMUI allows you to hide it almost completely. It's like people wants to find a reason to complain and they resort to the notch as they cannot find anything else.