Mediatek announced the Dimensity 1050 - its first chipset with mmWave 5G support. It will allow seamless connectivity through an easy switch between the Sub-6GHz and the mmWave standards. It is built by TSMC on a 6nm process, and the company promised devices with the chip as early as Q3 2022.

The Taiwanese company also introduced its Wi-Fi 7 platforms in the Filogic 880 and Filogic 380 with Wi-Fi 7 and Bluetooth 5.3 integration. 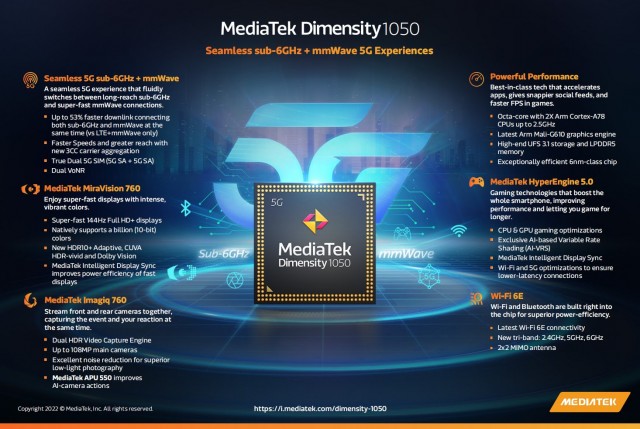 Finally, Mediatek brought to the stage two additional chips to power the lower mid-range phones of tomorrow. One is Dimensity 930 with faster connectivity than the 920 and support for 120Hz Full HD+ displays with HDR10+. The second is Helio G99, which is an evolution of the LTE-only Helio G96, built on the 6nm platform, instead of 12nm.

Yes - their chips are impressive and catching Qualcomm up in terms of technological advancement, no - their naming scheme is confusing, just like Qualcomm Snapdragon does. It's not impossible for buyers getting misled by the numbers and judge th...