We just got tipped with a new shot of an unannounced Sony Ericsson phone. We don’t mind getting images of unknown phones and actually we love taking quick peeks at what's cooking right now. Especially when it's phones as cute as the Robyn - an Android smartphone that rightfully deserves a name along the lines of XPERIA X10 mini.

After the QWERTY-equipped Kanna that we told you a few days back, the Robyn is the second Sony Ericsson device that surfaces this year.

The Sony Ericsson Robyn looks exactly like the already announced Sony Ericsson XPERIA X10, but only… twice as small. The cutie still packs a touchscreen and runs the Android OS. 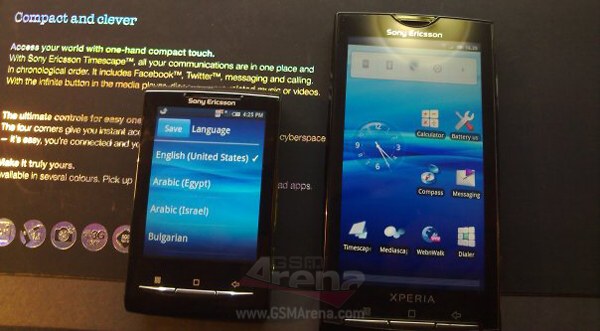 Unfortunately, there is no word on other specs. The only things we can tell are the features seen on the sign under the phone. We should expect the Robyn (or XPERIA X10 mini or whatever it is) to offer you access to social networking services such as Facebook and Twitter and to come with the shiny Timescape UI.

The smartphone will also feature 3G support, integrated camera and will be available in many colors.

Well, that's what's known about the Robyn so far. Drop us a line if you've got more info.

Thanks for the shot, Phono Teka! Keep them coming!

I just bought this and it is so cute even with the small size the screen is quite a good size as I don't like the bigger screened smart phones. Here are the specs for anyone who wondered what they were; "Sony Ericsson Xperia X10 Mini Robyn ...

Its a very cute phone.