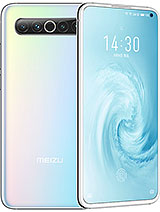 I wish they start selling 17 and 17pro in India too because now mi is also focusing in India to lunch their flagship phones they have launch phone mi 10 in India.

And in India Samsung, one plus, iPhones become way costlier than before, and now mi, realme is filling gaps by launching their flagships at a very reasonable price, I think it's time for Meizu to lunch these two phones to give very strong competition to mi and realme.

Gusta, 11 May 2020Check Mokee OS..I've had 2 bluetooth headphones. One lost it's bluetooth connectivity and the second won't charge anymore.
Both still work as wired headphones though.

Anonymous, 10 May 2020Missing B20 (800mhz) - this is essential in Scandinavia!This is China version. We don't know wether the global variant will be release. Just like the previous model. There's global version of Meizu 16s but not the 16s Pro. Sadly, the global version is pricier. Maybe some different in internal component and of course the taxes.

WolfpackN64, 10 May 2020I just don't want to deal with unreliable connections, more fragile headphones and charging ye... more1. I don't think you can go wrong with bluetooth 5/5.1 connection which all phones in 2020 have
2. Durability doesn't really change, wireless headphones surely aren't fragile, are they?

I agree with the 3rd point though

Dennis.K, 08 May 2020Well then, i guess you'd go with a V60 or Sony Xperia 1 ii or stick with your old phone if you... moreI just don't want to deal with unreliable connections, more fragile headphones and charging yet another device. Sometimes the way forward is just not changing anything at all.

If passive USB-C headphones became a thing, I'd might reconsider.

Don Hrle, 09 May 2020Nobody talks bout elephant in the room....lack of new android updates whatsoever. I Agree. The biggest disadvantage of owning a Meizu is non-existent software support. Forget about Android version upgrades in global ROMs. My Meizu 16th (Meizu 16 in China) came with Android Oreo in 2018 and still is in Oreo as of 2020. The FlymeOS is clean and stable but lacks the feature set, the finesse and the intuitiveness of China's best: Huawei's EMUI 10 on Android 10. I love to use my Honor View 10 not because of its hardware prowess but because of the awesome EMUI 10. It is without a spec of doubt the best Chinese ROM out there if features set is your main priority else OnePlus's OxygenOS.

In our country we have Meizu India as a company, hence all phone sold under Meizu branding are Google certified and have Google PlayStore pre-installed. No sideloading stuff here. We also get custom India specific features like support for dual SIM dual VoLTE which are even absent on global ROMs provided to other countries.

What's the point of 2 wide angle cameras on the back?

Nobody talks bout elephant in the room....lack of new android updates whatsoever.

Koko, 30 Apr 2020Many more phone has same design, don`t see why this is the best?They put the front camera on the right and make it smaller, which means that you may easily ignore the small black hole on the screen, that's pretty comfortable.

WolfpackN64, 08 May 2020No 3.5mm jack, no buy. Simple as that.I was right, Meizu 17 & 17 Pro does not have a 3.5 mm audio jack. But that was quite understandable as their audio dongle business will go out of business if they included one. Also now they launched their own branded bluetooth ANC headphones so they will avoid using headphone jacks in their phones and compell buyers to buy their bluetooth headphones. They need to suck more money from the consumers in the God forsaken Apple ways. Just like Apple bought Beats audio and Samsung bought JBL. And then they strategically removed the headphone jack to make more money.

Now every owner of 17 & 17 Pro need to separately buy a USB to 3.5 mm audio dongle. Also to note on previous Meizu flagships 16s & 16s Pro the audio output through USB was pure digital signal. In one way that is good as your dongle/adapter will have complete control on audio quality but bad in the sense the dongle will now be expensive as digital to analog conversion & its hardware needs to be done in the dongle.

The last Meizu flagship that had our beloved 3.5 mm audio jack was Meizu 16th (Meizu 16 in China) back in 2018 with SD845. Having bought one in 2019 @ $240 extremely happy with price performance ratio and the built quality. Audio on my 16th through audio jack is great, far superior than anything Samsung & Huawei have done till date. Only LG can beat Meizu in audio department. The dual stereo speakers on 16th is great I hope in 17 Pro it is even better.

Daeneryon, 21 Apr 2020All flashgrip smartphones expect Samsung don't have sd card slot. There is enough storage. R... moreApple intentionally stopped including analogue 3.5 mm audio jacks on their devices, as they found a way to earn more revenue by selling 3.5 mm audio adapter dongles and headphones. May I put this to light that Apple was the first manufacturer which started including the 3.5 mm audio jacks on their iPhones a decade back and claimed they are following a revenue free universal standard where you plug in ANY headphone.

Apple has a closed loop eco-system, they earn from every third party that manufactures accessory for their proprietary products. And this includes any kind of adapters & headphones to their devices having proprietary ports. You have to understand the bigger picture. Apple, Samsung, Sony, Oneplus, Huawei or for the name any manufacturer are here to do business. They will take every measure possible to earn more revenue from their customer.

Any audio enthusiast or an audiophile will laugh at anybody who says 3.5 mm audio jack is obsolete. Because they understand audio and seen $10,000 audio equipment that outputs through the 3.5 mm or quarter inch audio jacks connected to $5000 over-the-ear audiophile-grade open-back headphones. Audio is analogue, because human ears are analogue and hence the audio jack is analogue.

The question you may very well ask, why other manufactures are following the same trend? Well because they now understand there is a new scope to earn more revenue and they are following this trend my making their own branded dongles and stuff. For example Meizu now have their own audio dongle which you now need to buy for their flagships like Meizu 17 or Meizu 17 Pro. They are all forcing the customer to go the audio dongle and bluetooth headphones way (Meizu just launched their HD60 bluetooth headphones) thus earning more revenue. A valid and very effective business model.

The next question is, why all these manufacturers except Apple are not doing this for their mid range devices? Well bcoz removing the 3.5 mm audio jack on their mid-range devices will turn off their specific group of "cash cow" customers who are very price sensitive and not willing to pay an extra $20 for a cheap audio dongle. These customers have 50 other options to buy a phone with 3.5 mm audio jack and they will rather choose those.

This very well cements the fact that till today their is a HUGE demand for 3.5 mm audio jack. Hence all manufactures are currently targeting to fool the deep pocket buyers who are ready to pay $500+ for their flagship phone and won't not mind shelling $50 more for the Meizu audio dongle or pay $100 for each of their bluetooth headphones with their own brand names. Or in case of Apple, demand money to the manufacturer of such headphone & dongles.

In the end it's all about doing business.

It looks like cheap stuff, and I'm worried about Meizu's management situation.

Perfect Phone for me

Nice phone but no headphone jack

Total of 111 user reviews and opinions for Meizu 17.
ADVERTISEMENTS