Meizu 17 series will debut with Flyme 8.1 based on Android 10

Meizu is gearing up to release its latest flagships with the 17 series on May 8. We’ve come across numerous leaks so far and the latest one courtesy of the brand’s official Weibo profile confirms both phones will ship with Meizu’s custom Flyme 8.1 user interface based on Android 10. 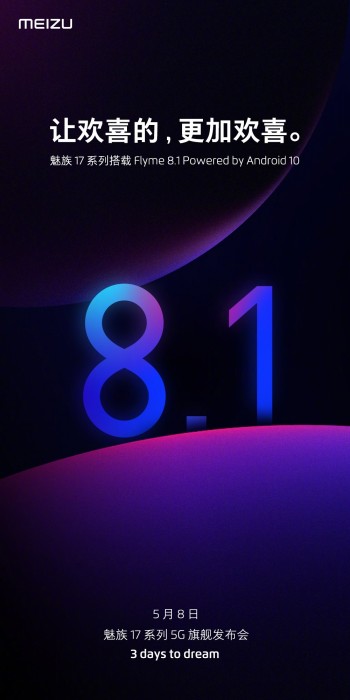 The company’s most recent version Flyme 8 was still based on Android 9 Pie. Meizu also holds a poor track record of providing timely updates which means there is little hope of a future major Android update coming to the 17 series soon.

Sadly, the new poster did not reveal any of the new Flyme 8.1 features. According to speculations, it will adopt the native Android 10 dark mode but that’s about the only detail we have so far.

They wasted so much resources skinning stock UI, this takes away from the software update/upgrade effort needed. I had tried their Note series, which never got any updates. Never again.

There software is getting better. Rumors are that Flyme 8.1 is pretty good.