A Meizu device, codenamed K52 has recently popped up on the GFX Bench database. The Chinese manufacturer has been the target of a lot of rumors about a 1,000 Yuan (around $160) smartphone, but no such information has been confirmed. This new device might just be it. 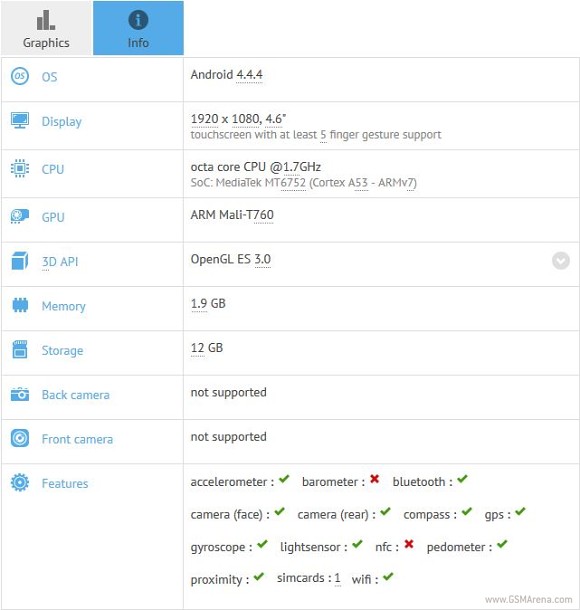 The specs show that it is powered by a MediaTek MT6752 octa-core CPU at 1.7 GHz, which is in fact a 64-bit chip with LTE support. This might not be as powerful as the MT6595 on board the Meizu MX4, but the architecture and fast connectivity are more than a pleasant surprise given the expected price tag.

Other hardware in the device includes 2GB of RAM, 16GB of internal storage and a 4.6 inch Full HD 1920x1080 pixel display, powered by a Mali-T760 GPU. This data is very much unconfirmed and might be subject to a lot of changes down the road. GFX Bench reports the current OS of the gadget as Android 4.4.4 KitKat and holds no information about a camera as of yet.

Two actual graphics benchmarks have also apparently been performed on the device, which we see posted on GFX Bench - Manhattan and T-Rex. The performance of the mystery device comes very close to the Oppo U3, but nowhere near the Meizu MX4 and MX4 Pro models.

Meizu has stated in the past, that no CNY1,000 phone can be ideal, which of course we all know. However in today's highly competitive market the company is facing major pressure from rivals such as Xiaomi and can't afford to leave the lower price segments unattended.

i'd like to buy this phone, but how about the camera?

Screen size might be the one reason for me to buy this phone. 5 inch is already too large for many Asian people using one handed. By the way, Who have not own a few tablets nowadays. There's no need to have both a phablet phone and a phablet ta...

Of course there is, and it's called portability. I have my phone in my pocket more often than I use it.