This is easily a phone you can pretend doesn't exist. And you don't have to try too hard either. The Meizu MX is something of a chimera. An iPhone body and a droid mind. It's not where you take things from - it's where you take them to. For a phone coming from China, the Meizu MX has no qualms with imitation. But it's not a characterless low-cost replica either.

Strictly speaking, the Meizu MX is an Android smartphone, but it goes to great lengths to emulate the Apple iPhone in its strengths and even some of its failings. The result is a unique Android experience that differs from iOS as well - it's a very curious device, the Meizu MX. 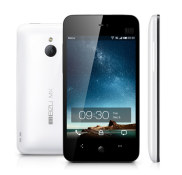 It's hard to deny that the Chinese company went all out loading up the MX for a fight. The phone packs a 4.0" ASV LCD screen of 640 x 960 pixel resolution (the same res as the iPhone 4/4S) and an Exynos chipset straight from the Samsung Galaxy Note (a tad faster than the one in the Galaxy S II).

Impressive stuff for sure, at least when you read the features off the specs sheet. Here are the rest of them, plus the disadvantages we found:

It's not all perfect, but the Meizu MX can certainly go against a lot of Android flagships and show them a thing or two. But can it match the highly polished iOS experience and the trend-setting iPhone hardware?

Tough question. After using the MX for a while, you get the feeling that Meizu went trough the trouble of emulating even the downsides of the iPhone. But then you notice things that you wish iOS and vanilla Android had. The same goes for some areas of the hardware.

Meizu MX in our office

We're still not quite sure what to make of the Meizu MX, so this will be an interesting journey. Just try to approach it with an open mind, if you dismiss it as yet another replica, you'll miss out on an impressive (if derivative) device.

Update, December 30: We updated the Meizu MX with the retail firmware, which runs the CPU at 1.4GHz (it used to be 1.2GHz before) and re-ran the benchmarks. Check out the results on Page 3.

GUYS PLEASE HELP ME !! does this phone really has a dual speakers, i mean stereo loudspeakers and if its, then where these two speakers located, and one thing if its really has a stereo speakers then how's the sound quality of the speakers and how ...

In all honesty, I go around a lot and have not seen it anywhere else... Europe or Asia.