Rendered images of the Meizu MX3 have surfaced showing the front and back of the upcoming smartphone. There are some rumored specifications, too. If they are to be believed, Meizu's next smartphone is going to feature a 5.1" screen, moving it a step beyond current-gen 4.7"-5" flagships and somewhat closer to the phablet territory. 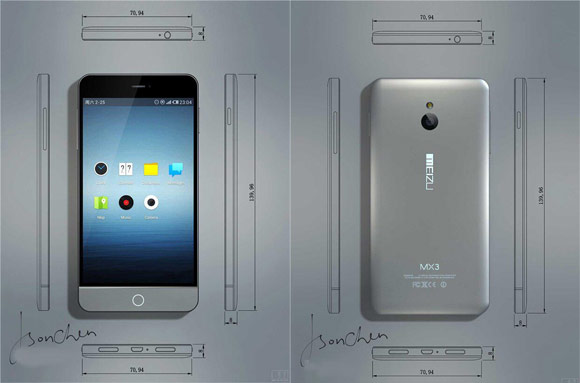 The type of the screen isn't known just yet, but is said to pack a full HD resolution. The Meizu MX3 is expected to run the third-gen of the company's own Flyme OS. According to srcleaks who has provided the photos and specs information, there'll be 2GB of RAM as well. Sadly, the CPU isn't disclosed at this point.

If those images are anything to go by, the Meizu MX 3 will measure 139.9 x 70.9 x 8mm. That is slightly taller and wider than the Meizu MX2, but significantly thinner, compared to its 10.2mm waistline.

Meizu hasn't spoken a word about the MX3 and is unclear when we could expect the Chinese smartphone to get announced or hit store shelves. We can only hope for more leaks from around the web to try and put the pieces of the puzzle together.

Apple can't sue anyone for "design stealing" since Apple themselves copied the LG Prada back in 2006. http://thelyingchannel.blogspot.com/2012/09/the-iphone-5-huge-disappointment.html And Meizu sucks. Cannot replace battery, no S...

I just wanna say MX3 is like HTC G6