AnTuTu has posted a chart with the top 10 best performing smartphones throughout the Q3 this year. The king of the chart is Meizu MX4, while the runner-ups are the Samsung Galaxy Note 4 and Samsung Galaxy Alpha.

The Galaxy Note 4 and the Galaxy Alpha are just a whisker below the Meizu MX4, while the rest of the devices are noticeably slower. All scores were calculated by the average of all user submitted scores. 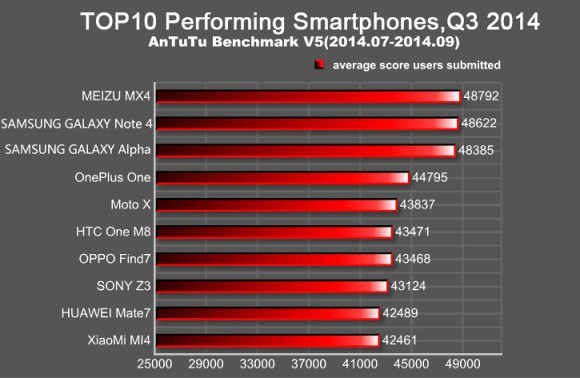 AnTuTu revealed the most popular smartphones for the Q3, 2014 in some countries. The Galaxy S5 is the most benchmarked phone in the USA, HTC One (M8) in Taiwan, Xiaomi Mi 3 - in China, Xiaomi Redmi Note in Hong Kong, LG Nexus 5 - in Russia and LG G3 in South Korea. You can check detailed graphs with the top 10 devices for each market right here.

Thanks for the tip, Chris!