The Meizu MX4 Pro is every bit as good as the MX4 - in terms of looks and feel, build quality, connectivity and the custom Flyme OS launcher. The thing is most people probably have no idea just how good the stock MX4 is. But if the MX4 was an easy one to slip under European users' radar, the Pro version is more likely to get noticed. And for the right reasons, too. 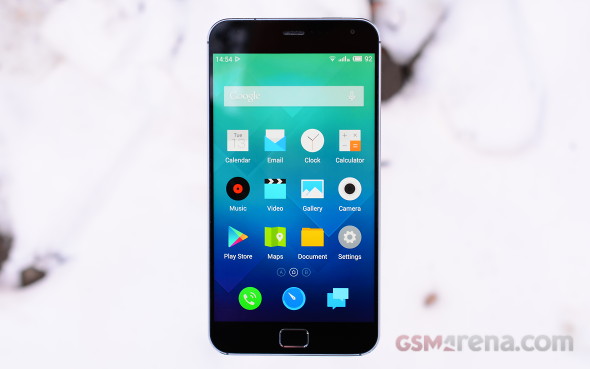 To begin with, it's the phone with the highest-res screen in the market. Now, the real value in that is still debatable but, like it or not, QHD screens are the way to go for the industry flagships.

And even if you don't care about the screen resolution, the Pro still has plenty of upgrades to offer. A better chipset is one. Meizu have returned to their traditional chipset supplier, Samsung's Exynos, which powered the MX3. It's the latest generation, of course - the Exynos 5 Octa is ticking inside the Samsung Galaxy Alpha, too.

An improved camera and a well-behaved and feature-rich fingerprint-scanning solution are other definite points in favor. A high-res selfie cam is not to be frowned upon either.

It's a tight and focused list of improvements that cover just about everything that could have been better about the MX4. The obvious exceptions are the non-removable battery and the lack of memory expansion. Unfortunately, the 64GB version isn't widely available - just like it is for the stock MX4.

The Pro is clearly better than the vanilla MX4 version in almost every way but we're obviously talking different price brackets here. The two will be selling alongside each other and that's by no means a Meizu invention. It's what Oppo did with the Find 7 pair, not unlike the iPhone 6 and 6 Plus, or even the Galaxy S5 and the Note 4.

In fact, the bigger and better parts of those pairs make up the key competition for the Meizu MX4 Pro. The stock MX4 is more suited to battling the likes of the Oneplus One and the Huawei Honor 6 Plus.

None of those can match the QHD screen of the Pro but that's duly reflected in the price. The real competition is an interesting mix of Chinese and global brands, QHD and 1080p screens, phablets big and small, old and brand spanking new.

Oppo has emerged as one of the top makers China has to offer. The Find 7 was among the first to offer a QHD screen and now, a couple of months later, it costs about the same as a brand new Meizu MX4 Pro.

Oppo's latest flagsip makes the cut as well, despite having a 1080p-"only" screen. The screen resolution is the only department where it falls short. With a fingerprint sensor / trackpad and a unique motorized camera, the N3 is perhaps even more expensive than the Pro.

Another early QHD-screen, one of the very first in fact, came courtesy of the sophisticated LG G3. It has the same display size with minimal bezels, 4K video, expandable storage and an optically-stabilized 13MP camera, all at a lower price than the MX4 Pro.

The Samsung Galaxy Note 4 and the Apple iPhone 6 Plus both command heftier price tags but deservedly stand atop the phablet food chain with exquisite build and refined software packages.

The one to properly challenge them perhaps is the Motorola Nexus 6. With a QHD screen and a Snapdragon 805 chipset it does cost a pretty penny but has another important advantage that's harder to put a price on - the latest Android Lollipop.

OK, the last three alone are some pretty scary heavyweights and Meizu should definitely be preparing for the arrival of the next batch of A-list flagships, which will be rocking QHD screens, the latest generation of chipsets and the latest OS version.

Still, a head start on the competition is a good thing to have, especially considering the price of the MX4 Pro will only have gone down by the time the Galaxies, Xperias and Ones start hitting the shelves.

The flipside is each of those will be available through carrier deals which, at least in Europe, is highly unlikely for the MX4 Pro. No reason to feel disheartened though - Meizu has a solid smartphone on their hands and a big enough market at home. The question is, how bad they want their product to succeed elsewhere.