The Flyme gallery has two viewing modes - photo and gallery. The photo stacks images into months while the gallery into folders. You can add or remove folders from the gallery and also search through it.

Viewing an image feels a lot like the iOS gallery. By default the bars around an image are white with the content controls but upon a tap they turn black and lose all controls so you can focus on the image at hand.

There's also a built-in editor that offers filters and all the basic controls for contrast, brightness and you can even add blur or vignette. You cannot use different editors from the stock gallery and would need to install a third-party gallery (like Google's Photos) to have different editors.

The music player can only find tracks located in the music folder. You can browse your collection the traditional way or you can select to have it filtered by folders.

In the first case tracks are sorted into several playlists like All songs, Recently added, Folders and you have the option to create custom playlists. When viewing All songs you can choose between three types of sorting in a tabbed layout: song name, artist and album.

The music controls are at the bottom of the screen. Choosing an artist will show you all the albums and corresponding songs.

You can access the equalizer from the advanced menu. It features several presets, which you can edit manually - but you need to insert the headphones first.

The MX4 Pro has a Hi-Fi sound setting, which allows you to set the audio for earphones, a headset or even an external amplifier.

The Meizu MX4 Pro comes with a dedicated Video app, but it expects videos to be placed in the video folder. You can use the file browser or gallery to get videos to play from elsewhere - it offers thumbnails and everything so we ended up using it more often than the Video app itself.

There's a pop-out option that allows you to view the video as an overlay to the OS. It's quite limited compared to Samsung and LG's modes for pop up play as you don't get any resizing or opacity controls - just play controls and the option to move the video around the screen.

The Meizu MX4 Pro didn't manage to wow us like the MX4 did. It played most of the video files we threw at it but did choke on some. We had issues with both AVC, MPEG-4 and MPEG-2 files which didn't play at all, while others with the same codec managed to play completely and without issue.

Overall movies played without issues up to 4K resolution on the MX4 Pro.

The Meizu MX4 Pro defied our expectations and turned out an audio output performance that differed significantly from that of the MX4. The new smartphone was every bit as clean as its non-Pro sibling, but obviously has a far more powerful amplifier that delivers way louder output.

The smartphone posted excellent scores all over the field when connected to an active external amplifier. It had no weak points to its performance and amazingly showed the highest volume levels we've seen in ages. Yes, it even did the unthinkable and beat the HTC smartphones.

Plugging in a pair of headphones leads to a moderate spike in stereo crosstalk, but the rest of the readings remain great. Loudness stays equally impressive, putting this one among the most impressive audio performers in recent times. You do have to fiddle around with the Hi-Fi menu in the settings to get the best out of it, though. 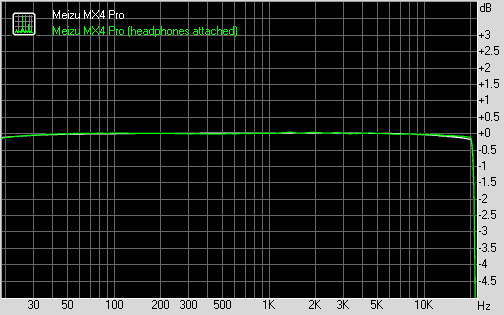