The Meizu MX4 has been on sale for a while now but Meizu in partnership with Alibaba are launching pre-orders for a YunOS version of the smartphone. The pre-orders start today and end on November 10, they are for China only for now.

To reserve an MX4 you'll need to deposit CNY 99 ($16), just make sure the payment goes through by November 10. The total price of the handset is CNY 1,800 for the 16GB model, the same price as the FlymeOS-powered version of the device. The price translates to $295/€232 though it's not clear when – and if at all – the handset will get a retail launch in the west. 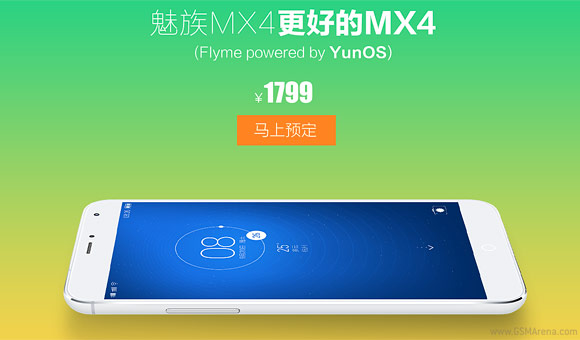 If you're wondering what's the difference between the FlymeOS that Meizu normally uses and the YunOS for this model, the answer is not much. Yun is based on Flyme and incorporate all its features (both are ultimately based on Android), though retail giant Alibaba has added its own performance, security and cloud tweaks.

Note that this isn't the rumored Meizu MX4 Pro handset, which is quite similar but has a QHD screen instead. Also note that a Gold-color version with FlymeOS went on pre-order yesterday.

Thanks to Chris for sending this in!

Very good . I need that smart phone. How can take this?

I like the look on the Meizu. Also for 1799yuan you get the same camera as on sony xperia z2 with awesome 20.7MP. wish they had more stock though!

Meizu smartphones are well known to be inspired by iPhone (both design and UI).