We didn't get the Meizu MX 4-core in its retail packaging but it came with a set of accessories, which users will most certainly be getting in the box. Our unit has a compact charger and a microUSB data cable. There's a tool used for easy opening of the back cover, too.

A charger, USB cable and back cover opening tool

We didn't get a headset and we are not sure whether there will be one in the final retail bundle.

The Meizu MX measures 121.1 x 63.3 x 10.3 mm, which is more than reasonably pocketable by today's standards. Not surprising really, a 4" screen is downright small by the same yardstick.

The Meizu MX 4-core is impossible to tell apart from its dual-core predecessor and that's not the best way to go about an upgrade. They doubled the processing power but didn't bother doing anything about the packaging - and to be honest, we weren't impressed with the original.

The Meixu MX and MX 4-core side by side

We've been over the uncanny resemblance to the iPhone. Being one of only few quad-core smartphones, the Meizu MX 4-core is to be taken seriously but looking like an iPhone replica doesn't help.

The phone is made entirely of plastic and we have to say we're not big fans of it. The screen is a fingerprint magnet and the glossy white battery cover looks cheap and doesn't allow a secure grip.

The phone has a good hand fit thanks to the beveled edges of the back and the compact size, but the glossy rear is disappointing in terms of both looks and feel. The battery cover resembles the hyperglaze finish of the Samsung Galaxy S III but isn't anywhere near it quality-wise.

There's a kind of double coating with a see-through layer on top of the white plastic. You can easily spot this around the 3.5mm jack where the transparent top layer creates an unpleasant flake. The surface is very slippery and fingerprint-prone. Smudges are as good as invisible on white but most of the time the phone feels like it's going to slip out of hand.

At the front panel we have a narrow slit for the earpiece and the video-call camera next to it. An ambient light and a proximity sensor are also here.

Below the screen is where it gets interesting - the central Home key is small and rounded, subtly projecting from the surface. That makes it easy to find by touch and it's fairly comfortable to hit, despite its small size.

On either side of it are the two capacitive soft keys. They are rather special - a Meizu patent actually. The context aware keys change appearance and function depending on what's happening on the screen.

The left one is typically a Back key and shows a < symbol but switches to a single dot when there's nothing to come back from (it serves as a lock key in this situation, upon a press and hold).

The right one spends most of the time as a Menu key (displaying three dots) but turns into a single dot when there's no context menu available. Anywhere in the interface and regardless of whether it's a single dot or a three-dot pattern, this key launches a heavily customized task switcher upon a press and hold.

That's not all for the soft key tricks though - the capacitive controls are haptic enabled, with strong sharp vibration upon a press. What's really impressive though is the icon rotation to match the orientation of the screen. Also, you can adjust the brightness of their backlighting individually from the screen and upon a tap the keys pulse brighter (even if they're at the brightest setting).

Now, such keys may not seem like much, but Meizu's implementation is really cool (and one of the highlights of the MX 4-core), so we wanted to cover them in detail. You can see them on video in the User interface section of this review.

The rest of the tour will go pretty quick. The left side houses the volume keys while the right side is bare. The volume rocker is really uncomfortable - thin and quite flat.

The volume keys are on the left, while the right side is bare

At the top are the Power/Lock key, the 3.5mm audio jack and the secondary noise-cancelling mc.

A view of the top: Power/Lock key, 3.5mm audio jack and the secondary microphone

The bottom features the microUSB port and primary microphone along with two connectors that are most likely for the dock. The microUSB port serves three different duties - data connection to a computer, charging and HD TV-Out over a MHL link.

The microUSB port is at the bottom

The back of the Meizu MX 4-core features the 8MP camera lens with an LED flash right next to it. The loudspeaker is also here, located at the sloping edge of the back. The loudspeaker doesn't get muffled, but you should be careful with the camera - it can get scratched and is usually covered in fingerprints.

The back is the only place that offers a hint of a difference between the two MX models. Our test unit has a small 32GB label to indicate the amount of inbuilt storage. The 4-core comes in 32GB and 64GB flavors. The original Meizu MX only had a 16GB version.

The back features the 8MP camera lens, the LED flash and the loudspeaker grilles

The back cover can be popped open to reveal the microSIM card slot, which uses a metal tray to get the card in and out easier. You can also see the battery, but it's not user replaceable (not easily anyway), as it's wired. The battery is a 1700mAh Li-Po unit, which is 100mAh larger than what the original MX had.

Taking a peek under the cover

We are yet to complete our dedicated battery test, but we'll update this article with our findings once it's ready.

Update, July 23: And it's done. It scored an endurance rating of 38 hours - a little less than the dual-core MX due to less efficient standby, but in each of our usage scenarios (talking on a 3G network, browsing the web over Wi-Fi and watching videos) the MX 4-core can last an hour longer. 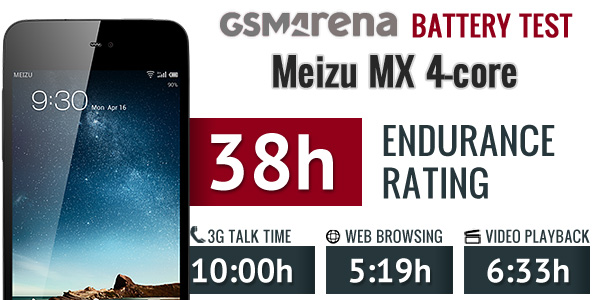 You can read more details about the battery life of the Meizu MX 4-core at our blog.