Yesterday we reported that the quad-core Meizu 4-core is now available in various stores around the globe, but it turns out that the smartphone hasn't officially gone global just yet. Meizu reached out to us and clarified that it hasn't yet released its top-dog smartphone outside of China and what we saw is "probably someone in Hong Kong buying from our stores and listing it on Amazon". 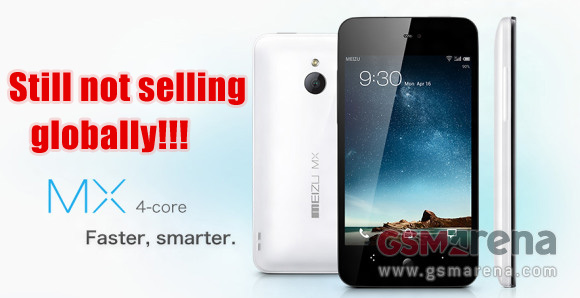 The phone is also available through eBay and through a few private online shops. The fact that the listings are from unofficial resellers probably also explains why the 32 gig variant was priced at the steep $650 (up $180 from Meizu's native price). The 64 gig 4-core will set you back $750 and since Meizu itself is yet to release the phone you won't even get international warranty.

It seems then, that waiting for the official international debut of the smartphone would be a smarter move at this point.

While you wait, make sure you drop by our Meizu MX 4-core review to see what the phone is all about.

meizu is not that bad, i remenber their mp4 were pretty decent

^^^this on the spot! NO RESSELING VALUE!! even my friends wont buy it

i am terminal tester, i have a lot of huawei and zte in tests. meizu not yet, but is the same low league. all this chinese non-fakes products are below average with many issues: all have veeery low sound speakers,you can't speak properly on skype,hea...