Micromax has unveiled the latest addition to its smartphone lineup, dubbed Canvas Doodle 2. The device will retail for INR19,990 (approximately $310) and will be available throughout India starting today. 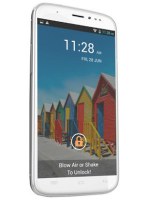 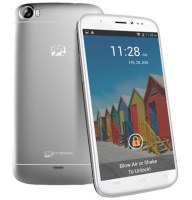 It runs on Android 4.2.1. Imaging is handled by a 12 MP rear camera and a 5 MP front-facing one. There's also 1080p video recording. There are 16 GB of internal storage, which sadly appear to not be expandable.

Equipped with a stylus, which comes in the retail package, the Canvas Doodle 2 lets you... well, doodle over pictures with the M!Doodle app. There's also a flip cover accessory, which moonlights as a kick-stand.

The Micromax Canvas Doodle 2 comes with M!Doodle, M!Live, M!Zone and M!Security preinstalled among other apps. On a more absurd note you can blow on the device to wake it up and also shake it if you want to appear more normal.

Micromax canvas Doodle 2 is superb smart phone . It has all latest features and specifications that we want to expect from own smart phone . It is supported all latest apps like whatsapp ,google map and gps . It's model is very attractive and availab...