Microsoft has its own take on Google Cardboard

Virtual reality might be the path for a richer multimedia future, but, currently, most hardware kits are quite out of reach for every-day consumers, be it because of a hefty price tag, lack of content or daunting hardware and software setups. In this respect, mobile phone-based headsets sparked, like the Gear VR and other more user-friendly devices, like the HTC Vive sparked a new push towards simplification, but neither have done quite as much to popularize virtual reality as Google Cardboard.

A couple of lenses, cardboard and your phone  incredibly inexpensive and straight-forward, yet loads of fun. The system has already been emulated by numerous third parties and employed in countless software projects. It seems that Microsoft is finally hopping on the same VR creative wagon as well, with its own take on a Cardboard headset, just recently spotted in some promotional banners. 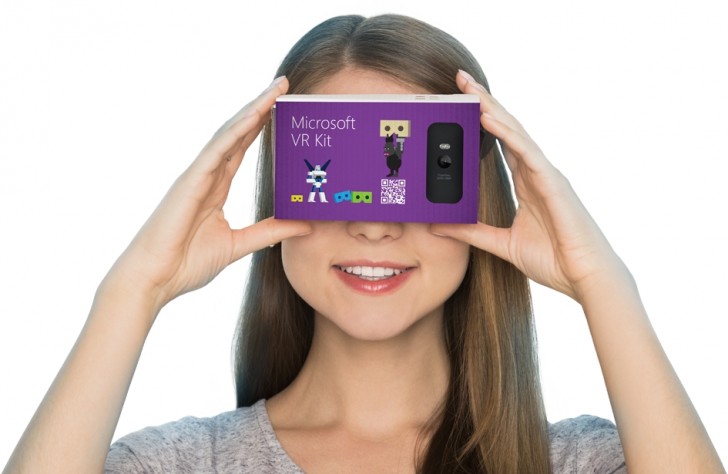 In all fairness, the US giant has already demonstrated impressive achievements with its HoloLens system, so, the field is far from new, but the two projects are still quite different  one being augmented reality, the other virtual. Not to mention the obvious cost and technological gap. In any case, the device, dubbed simply Microsoft VR Kit, looks promising enough, in the sense that it should bring all the creative possibility of Cardboard to the Windows realm.

The Kit isn't officially announced quite yet, nor is the software development kit that will power it. The above banner was spotted as part of an upcoming hackathon in Russia. Microsoft is trying to bring attention to the event and lure in developers and multimedia creators to use the new platform. It will be held on October 17 in three categories  game, education and oddly enough, corporate apps. The winners will be given a free VR development Kit to further their work. Presumably, this includes a Lumia device as well, seeing how the rest doesn't exactly tempt with a lot of value. Also, it is interesting to see if Microsoft releases the schematics for the VR Kit, just like Google did and which devices it will support.

And if you are interested in participating in the said hackathon in Russia, you can sing up at the source link.

So you liked everything I said :P

The guy that always up voted your comments but never posted anything:P