Today Microsoft has started sending out media invites for an event it's holding on October 6 in New York City. The invite itself only says that we're going to see new Windows 10 devices, as you can gather from the image below.

However, past leaks have talked about the Microsoft Lumia 950 and Lumia 950 XL high-end flagship duo becoming official at an October event, and now we know when that will take place.

Alongside the two highly-anticipated top of the line phones, Microsoft is apparently also going to unveil the Surface Pro 4 tablet and a new Band wearable. 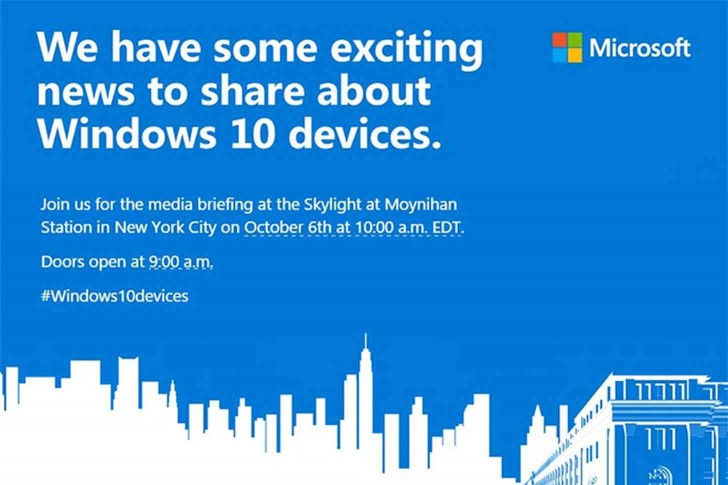 In the past rumors have talked about a bigger Surface tablet perhaps seeing the light of day this year. This could come with a 14-inch touchscreen, but it's unclear whether it's going to be ready for the October event.

The Surface Pro 4 should keep the form factor and charging mechanism of its predecessor, while packing some other upgrades. It's likely to be thinner and lighter than the Surface Pro 3 and it might come with a fingerprint sensor too.

The Lumia 950 and Lumia 950 XL had official-looking press renders leaked last month. They are going to both sport QHD resolution screens, 3GB of RAM, 32GB of expandable storage, a 20 MP PureView rear camera, a 5 MP selfie snapper, and a USB Type-C port for charging. The 950 XL shall come with Qualcomm's Snapdragon 810 chipset and a 3,300 mAh battery, while its smaller sibling will pack the Snapdragon 808 and a 3,000 mAh cell.