The Microsoft's Lumia 950 XL is the face of the new Windows series and a reboot of the company's smartphone business. Microsoft may have been slow in adopting new tendencies and features, but it made sure everything is done right with the Windows 10 Mobile premiere.

And indeed the Lumia 950 XL lives up to all the promises and then some. The Lumia 950 XL is the most powerful Windows phone to date. Both the screen and the camera are absolute treats to use. 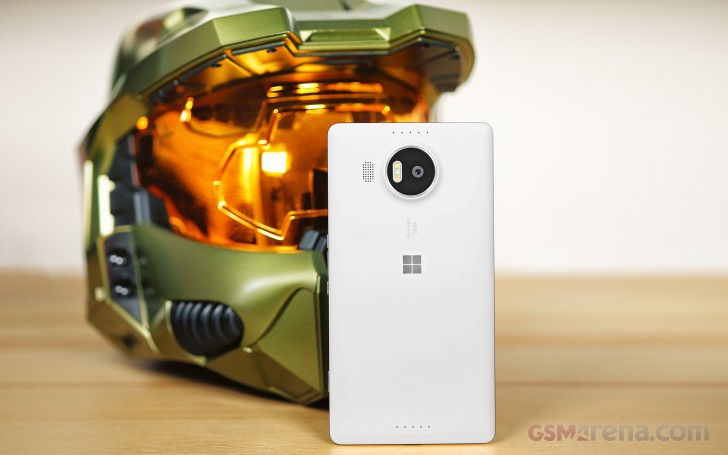 Getting into details revealed some great software tricks the new universal Windows offers, including the innovative Continuum screen expansion.

Windows 10 comes with a number of tricks up its sleeve with improvements both on the surface and under the hood. For the first time it unites the App Stores of the Mobile and Desktop OS and it's on their mobile devices where Outlook, Office, Cortana, OneDrive and Xbox all come together. And since most of those come with a UI that's much like that of their desktop counterparts, the unique Windows Continuum allows you to use the Lumia 950 XL as a PC replacement from time to time.

All the impressive scores and features aside, the Lumia 950 XL is somewhat lacking on physical appearance. It performs like a flagship champ, it's priced like a flagship champ, but it doesn't look the part - the matte polycarbonate just doesn't feel as premium anymore. Microsoft could have gone for glass or metal, yet it decided to stick to its root and keep it simple and durable. Perhaps it's for the better after all, as it allows them to keep the convenience of having a removable battery under that battery cover.

Although the Lumia 950 XL gets pretty much everything right, but the phablet market has flourished lately and there is plenty of competition already. The Androids have claimed this segment first and the growth of the segment made even Apple rethink its strategy and out a bigger iPhone. There was a time the Lumia 1520 was among the few big phones, but that's not the case anymore.

Samsung's Galaxy Note5 and the Galaxy S6 edge+ are the most immediate threat to the Lumia 950 XL success, especially now that the Note5 is rumored to finally make it to Europe. Both Galaxies offer premium glass designs with curved elements, Quad HD AMOLEDs and the fastest chips on the market. The 16MP snapper Samsung used for the Galaxy S6 series is equally capable as the 20MP PureView.

Meizu's Pro 5 also relies on a 5.7" AMOLED panel, but with a lower, 1080p resolution. This allowed the Exynos 7420 chip, the same as in the Galaxy S6 lineup, to outperform every other smartphone currently available on the market. Its 21MP camera turned among the best, too, plus you can get it with double the storage if you like. The best part about the Pro 5 is its tempting price.

LG G Flex2 offers a 5.5" AMOLED screen of 1080p pixels, it runs on Snapdragon 810, and packs a decent camera hardware. Its key selling features are the curved screen and self-healing rear coating. It costs half the Lumia 950 XL, which is also important.

There is also the OnePlus 2, which matches the G Flex2 screen, chip and camera, but comes in clean and simple shell, and runs on a rather untouched Android OS with Oxygen launcher. It's also a lot cheaper than a Lumia 950 XL.

Finally, if Windows and Android are not your thing, then you're probably tempted by the Apple ecosystem. While the iPhone 6s Plus excels mostly design-wise when compared to the 950XL, Apple still offers the richest app repository around.

We couldn't ask for more with the new Lumia 950 series and the 950 XL model in particular. Microsoft has outdone itself in every way, delivered on every promise, and even succeed to surprise us. The Lumia 950 XL isn't the perfect flagship, and Windows 10 Mobile isn't the perfect operating system, yet the leap from the previous generation is tremendous.

It may not be perfect, but the Lumia 950 XL is capable of everything an Android smartphone can do, and then there is Continuum and universal apps. The benefits of the latter may not mean much to you right now, but it allows you to buy an app for desktop, smartphone and Xbox with a single purchase.

The Windows future seems bright as of today and so is the Lumia 950 XL path. It may be thorny, with many battles awaiting ahead, but it has every chance for a success. Hopefully, Microsoft will manage to keep this momentum going and we'll see genuine developer interest in Windows Mobile for the first time since its original release.