Of course, he didn't mention any specific numbers, but what he did say is in November 2012 they've sold 4 time more smartphones than the same time last year.

And even better, around this holiday season, that number rose to 5 times the last year's Christmas sales. 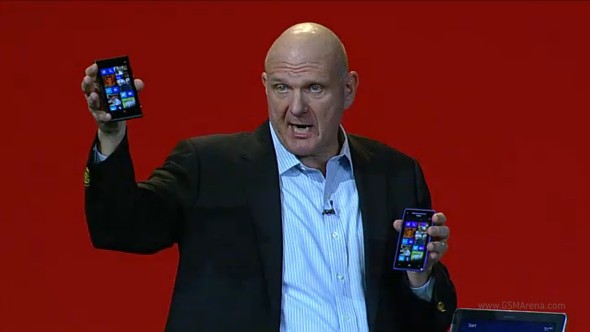 Now we wouldn't count on this to be any serious number given that analysts have found Microsoft's market share to actually shrink in the US this November compared to August. And Windows Phone is still at the bottom of the mobile OS ladder besting only the dying Symbian breed.

Anyway, we guess even analysts don't know the exact number so these are just estimates. In fact, nobody will know anything certain before Microsoft themselves announce a proper number for smartphone activations - something, which is hardly going to happen anytime soon.

Update: AllAboutWindowsPhone.com has an intriguing calculation of the actual sales numbers. Their author reckons since analysts suggest roughly 2.5M Windows Phones have been sold last Q4, then worst case scenario, this year's number should be around 10M for the whole quarter.

While we were watching Qualcomm's press conference, we couldn't help but snap a few more screenshots with Steve Ballmer being such an expressive stage speaker as usual. We hope you appreciate the humor in the situation, we are by no means trying to belittle Microsoft's efforts and their otherwise top-notch mobile operating system.

Interested to hear the man speak himself? Checkout the video in the source link below. You might want to fast forward to 19:00m to get to the part about smartphones. It's only 2-3 minutes long.

Oh, and if you want a good (but maybe biased) analysis of mobile manufacturers and carriers, just go to the Tomi Ahonen's blog (go to google or any other searching engine and type: communities dominate blog). It is quite informative, even if it could...

I must acknowledge one thing from the anonymous guy, even if I do not appreciate his way to write: the topic here is not" how many firms are using GNU Linux" but "how did WP performed in sales terms". I would answer "not th...