Only 4.5 million Lumia phones were sold by Microsoft in the last quarter of 2015, according to the company's just released Q2 fiscal 2016 earnings report. That's down from the 10.5 million figure reported in the same quarter the year prior. 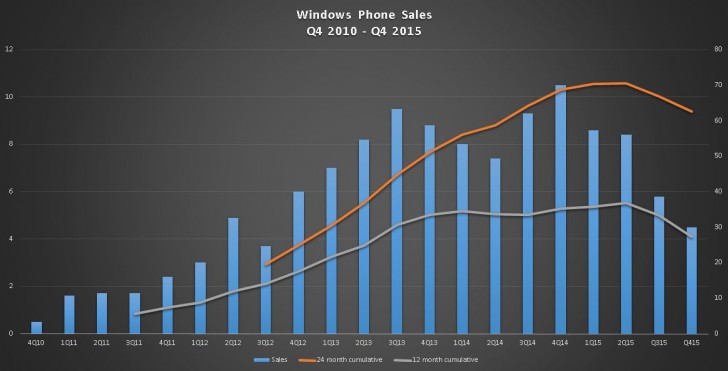 This translates into a drop of around 50% compared to the last quarter of 2014. Considering the latest IDC report which said that a total of around 400 million smartphones were shipped in Q4 2015, Microsoft's share comes out to be just over 1% for the quarter.

Well, what to say? The numbers speak for themselves. Hopefully Q1 which will be the first where the new Lumia trio - 550, 950 and 950XL is available for the full three months will help turn things around.

Good day. I've bought a Microsoft Lumia 430, Made in China. But it's battery is very very weak. I am operating only incoming and outgoing call activities. But the Battery is giving only max 20 hours service. It's operating system is so difficult. I d...

Anyway thanks for all the info. See you around.

Competing with price is very difficult now. There are very good phones from Xiaomi with better specs and at a lower price. You are right the W10M market in increasing very slowly. Currently the worldwide share is around 2.88%. But in some co...