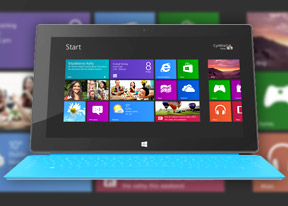 Microsoft is presenting two new Surface tablets, saying "reinventing the wheel is not the goal, making it better is." This better wheel of theirs features a more powerful chipset, improved battery life, better screen, more ports, and even the accessories are better.

Well, there were quite a few complaints about the original Surface duo, but Microsoft seems to have taken them to heart and made the tablets better. 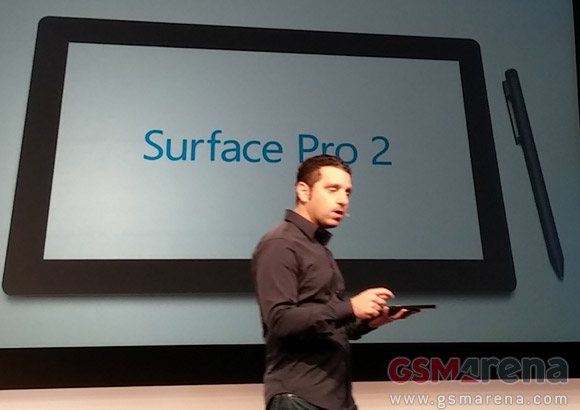 The high-end model is the Surface 2 Pro with a new Haswell processor from Intel. This new chip allows it to run faster, cooler and use less energy in the process. Microsoft claims the Pro 2 is faster than 95% of laptops out there and even showed how it processes 6K footage (9x Full HD resolution) in real time.

The battery life has gone up by an equally impressive 75% (again thanks to Haswell), and that's before you add the Battery cover.

Speaking of covers, the new Type Cover is 1mm thinner than before – that's as thin as the first-gen Touch Cover – but features an improved key travel of 1.5mm and it's even backlit.

The Surface 2 (it's just that now, the "RT" has been dropped) has seen some major improvements too. For one, it's now white to accentuate its magnesium build (there won't be a black version). Also, Microsoft moved to from a 3 piece design to a 2 piece one, which is also thinner and lighter than the first generation product.

The Surface 2 features the same 1080p screen from the Surface Pro 2, no more 1,366 x 768 resolution that other tablets make fun of. The chipset is 3-4 times faster too and the bus speeds for memory and Wi-Fi have also been improved.

Battery life on this model has been improved by a modest 25%, but battery life was a problem for the Pro more than the RT.

Stay tuned as we're looking to get some face time with the new tablets and we'll post hands-on impressions here!

they have 512 gb version also

I am trying to purchase a Pro 2 with 512GB in HK through the preferred retailers (like Suning and Fortress)but I was told not only would I be able to order it, but also that they do not know how to order it from Microsoft. One of the retailers even ...

microsoft has really improved surface from the previous version... the tablet with these kind of specs is surely appreciable and definitely worth checking out...