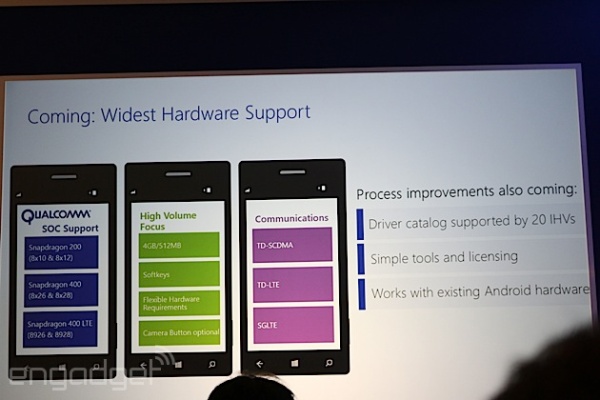 With Windows Phone 8.1, the Redmond giant will add on-screen buttons along with hardware support for Snapdragon 200, 400 and LTE chipsets. The new changes will allow OEMs to produce cheaper devices or even reuse their existing droid handsets.

Additionally, the forthcoming update will allow you to store your applications in the microSD card, which also means that the manufacturers can now ship devices with 512 MB of RAM and 4 GB of memory. The Windows Phone 8.1 will include dual-SIM support with live tiles for each SIM and the ability to link those in the user interface.

Microsoft's press conference was not only about detailing its WP 8.1 update, the company also announced a couple of new hardware partners. The Windows Phone platform will now be driven by the likes of Foxconn, HTC, Huawei, ISR, Karbonn, Lenovo, LG, Longcheer, Nokia, Samsung, ZTE and Xolo.

Unfortunately, Microsoft has refrained itself from detailing a lot about the upcoming Windows Phone 8.1 update. However, the company is expected to provide more information during its BUILD developer's conference in April.

There are solution in settings