The first official photo of the as of yet unofficial HTC Desire 8 leaked courtesy of Chinese website MyDrivers. Some of the phone's specs also surfaced hinting the upper mid-range nature of the device. 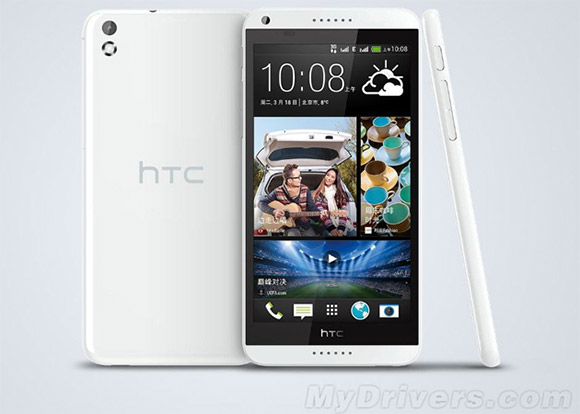 The HTC Desire 8 is rumored to feature a 5.5" display of unspecified resolution, which is the largest HTC has given a non-flagship device to date. At the back of the plastic body sits a 13MP snapper with LED flash, while a 5MP takes care of video chatting and selfies photography at the front.

With dual-SIM functionality on board, the Desire 8 will be available in red, yellow, orange, cyan and white. As you can see from the photo above, HTC has given the phone dual front speaker setup.

Yet more hints from the leaked press shot are the missing hardware capacitive buttons, which means that the Desire 8 will be following the M8's lead and adopt on-screen navigation buttons.

The HTC Desire 8 is expected to be announced on March 18 in Beijing, but here's hoping we meet it sooner in Barcelona later this month.

at present, htc desire 8 is the only cell phone in pakistan under 13 mega pixel camera category with dual sim option (from a standard company)

I was thinking to Purchase either Sony xperia Z1 or HTC ONE but after recent arrival of HTC desire 8, i am simply astonished and excited about this new Beauty of HTC Desire 8. No doubt in it that i m going to Buy this beautiful Cell phone but i have ...