Now one of those devices (or the only one) has been photographed in the wild over in China, Huawei's home country. 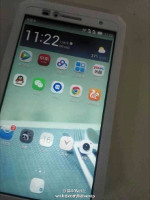 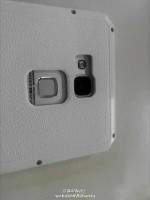 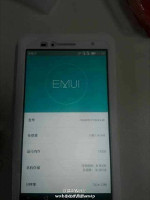 Huawei Ascend G7 in the wild

As you can see, the smartphone is enclosed in a protective case that doesn't give out its looks, but the fingerprint sensor on the back, along with the camera and the flash, have special cutouts made for them.

The design of that arrangement on the back is identical to what was featured on a leaked back plate from a while ago, but at that moment we thought we were looking at a part for a flagship offering.

This handset, though, is not that, as the final picture in the set proves. It's going to have a 720p touchscreen, a 1.6 GHz CPU, and just 1GB of RAM (with 16GB of built-in storage). With those specs, it becomes clear that what we're looking at here is nothing more than a mid-ranger, perhaps one that will get official as the Ascend G7.

This might get unveiled as the successor to the Ascend G6 that was released in May. The G6 aped the looks of the higher-end Ascend P6, so the G7 may do the same to the P7.

All this said, we're still hoping to see some higher-end gear too in Huawei's presentation on September 4.

so now it doesnt cost u arms & legs to get an finger print sensor on the phone, great