Our mobile chipset guide: The 2017 edition

2. Here's what makes your smartphone tick

So what is a chipset anyway? Much like the name suggests, a chipset is a set of chips, tasked with controlling the data flow between the integral parts of the system, like the central processor, the memory, the storage, as well as the input and output devices and peripherals. With computers this hardware part rarely determines the quality of the user experience - the processing power there comes from the CPU.

But with smartphones, it's a whole different story. If we are still looking for a personal computer analogy, the mobile chipset houses the CPU plus a ton of other things. Imagine someone took your computer's entire motherboard, CPU, and graphics card and they shrunk them down to a tiny element that is smaller than most postmarks. It's what System-on-a-chip is. Enter the SoC.

In a modern smartphone or tablet, the chipset, or the technically more correct SoC, houses so many integral components, that there is hardly anything important left outside of it. Sure, this is an extreme overstatement, but the fact is that a modern Qualcomm or MediaTek SoCs typically house not only the CPU and GPU cores but also various modems, sensors, navigation and communication tech, as well as controllers and data channels to everything from RAM and storage to cameras and fingerprint readers. And that's just the start of the component list. The limited physical space, and the incredible power and thermal constraints have changed the rules of the game for the chipsets on mobile devices and have driven innovation in the space at a rate we don't see with personal computers.

For example, many older handsets used to have even the network modem housed independently from the chipset. Nowadays, developments in the endless battle with the limitations of the form factor have pushed the envelope to a point where solutions like Samsung's ePOP design is trying to fit inside the main chipset not only the modem but some unconventional hardware - like RAM and storage.

Besides saving on valuable space, having components closer together has other less obvious benefits, like shorter and more efficient communication channels and elaborate resource sharing. Of course, the flip side is typically more heat. The struggle for finding the right balance in any given use case and device class is real. And that is where some other aspects of modern chipsets start to weigh in.

First off, it is the manufacturing process used to build the chipset.

When it comes to semiconductors and the chips based on them, they all share a common trait - heat. It is one of the main reasons why cramming too many transistors in a small area can lead to unstable results. But, adding extra transistors is the easiest way to get more computational power (this is an oversimplification as well). So, what is the solution?

Well, better compounds, improved architecture, and more efficient component design are the start. But improving the manufacturing process seems to be yielding the most tangible results year over year. Technically referred to as "semiconductor device fabrication node" - it is the technology of gradually creating electronic circuits on a pure semiconductor surface, called a wafer.

We're talking about a very complicated process, involving a multiple-step sequence of photolithographic and chemical processing, usually done at a manufacturing facility referred to as a 'fab.' So, that is how and where the chips that power your smartphone or tablet come to existence and the main characteristic of said process has to do with size.

And by shrinking the process, engineers have been able to place more components on a fixed unit of surface area or just do it more efficiently. From 10 µm in 1971, we have managed to move all the way down to 14 nm. Hopefully, we'll be seeing even 10 nm get announced 2017. And the prospects of simply scaling down, without worrying about other pesky physics constraints is looking good up until around 5nm, which we should hit in 2020. 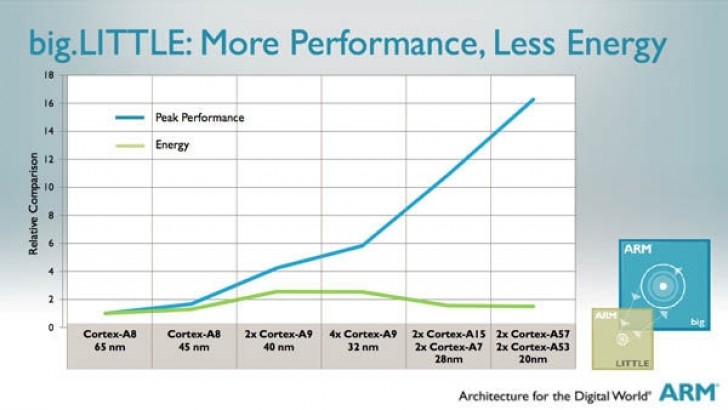 But, what does that mean for our all-mighty chipsets? Well, simply put, once again, the extra wiggle room from the smaller and more efficient process can be used to achieve better computational performance and improved power efficiency. While not mutually exclusive, these two are often balanced out one way or the other. This is one of the main reasons why we were equally excited by the new performance heights the Snapdragon 821 achieved, as well as the extreme power efficiency of chips like the Snapdragon 625.

After the fabrication process, another important consideration is the chipset architecture of choice.

We won't be getting into too much detail on the topic, but there are a few points to be made here that less seasoned hardware shoppers might easily miss.

In contrast, ARM's design has always been mobile-first. And again, unlike Intel, ARM doesn't manufacture any chips. Instead, their business is to come up with new designs and to sell them to other manufacturers, which in their turn incorporate them into products of their own. Most smartphones nowadays are based on ARM chip design such as Qualcomm's Snapdragon line, MediaTek's MT models, Samsung's Exynos, as well as the A-series chips, inside the iPhone.

ARM has developed many architectures, spanning all the way from ARMv1 to ARMv8-A and many different types of cores, based on each architecture. Some of them are qualified as microcontrollers, like the Cortex-M line or real-time processors - the Cortex-R. The ones we are interested in are only the application processors, designated by the Cortex-A moniker. 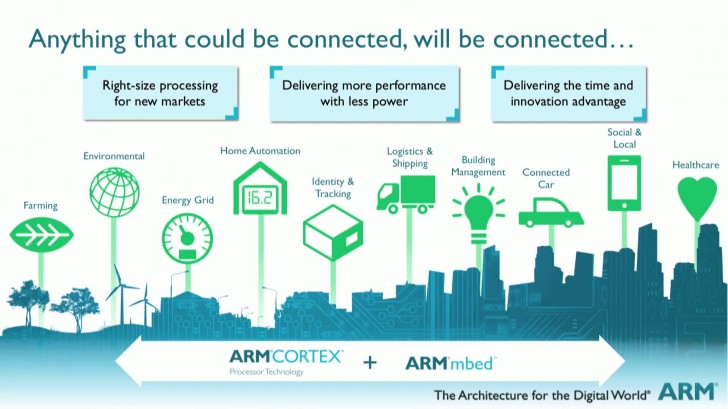 ARM-based chips are typically a lot more power efficient than Intel's and tend to run cooler. Performance-wise, they may be still behind from their x86 counterparts, which have a desktop pedigree. However, ARM chips tend to excel in other areas, like hardware video decoding. This might have been necessitated by the lack of sheer power of the CPU, but the fact is most ARM chipsets do better than their Intel counterparts and at a lot lower price point when it comes to encoding and decoding video codecs.

This whole talk of instruction sets comes to show that if you get a smartphone with an Intel chipset, it would be a whole different beast on the inside than any of the other ARM-based solutions. This is getting an increasingly less of a consideration for end users as there were no recent mainstream smartphones in 2016 to use any of Intel's chips. This is also the main reasons we've limited our performance comparisons to only ARM-based chipsets.

And finally, before we get to the actual performance talk, let's spend a little more time discussing what makes ARM-based CPUs different from one another and why sometimes a quad-core CPU can be the better choice than an eight-core one.

Not all CPU cores are born equal

And finally, we get to the most significant chip inside a chipset - the CPU. It's the single most important factor for a chipset's performance. There are various other factors, too, but by getting into more detail about the CPU itself, we hope we would be able to show you how the various makes of chipsets compare to one another performance-wise (chipsets, not phones) and what makes mobile CPU so different.

If there is one key takeaway from this article, we hope it's this - more cores don't always mean better performance. Of course, core number is a valid consideration, but marketing tends to put way too much focus on this aspect - especially for cheaper phones.

When looking at a mobile CPU specs, the important questions you should ask are:

Clustering is a clever trick CPU manufacturers use where they freely mix and match cores of different types or different clock rates. The different types of cores are combined into clusters. And when we say 'trick,' we mean it in the best possible way - we're not suggesting anyone is trying to trick you.

Clustering is a legitimate way of allowing jiggling the CPU load across powerful and less powerful cores depending on the load priority so that you get both good performance and battery life. Clustering is one of the main reasons why the mere number of cores won't give you the full picture.

To use an analogy, if someone told you that you were to race in a horse-drawn carriage, the number of the animals employed would not mean much unless that someone told you how fast or slow the horses were and whether they get tired quickly or not.

And to translate that nice analogy into the smartphone world. Which one would you rather have - an all-powerful octa-core Lenovo Vibe K5, or a measly quad-core OnePlus 3T? And do we dare even mention the iPhone 6s with its 'measly' two cores?

Yes, processor cores are not born equal, and there can be different types of cores inside a particular CPU. A Cortex-A72 core is more capable than a Cortex-A53 core, and a Kryo core dwarfs both.

In real-world terms, many applications are still not making use of the multithreaded capabilities of the CPUs. Some silicon, like Apple's A9, excels at single core performance, which still counts a lot. Of course, cache size and speed, memory interfaces and bandwidth all play a vital role in the overall performance equation as well.

That is how architectures, like the very popular big.LITTLE one came to be. It is mostly the norm nowadays, with implementations including two dual-core clusters or two quad-core ones, with various cores. Qualcomm, Samsung, MediaTek, HiSilicon and even Apple all have at least a few implementations of big.LITTLE.

On the other hand, there are also solutions like MediaTek's "True Octa-core" family of chips. The MT6592, for example, uses eight Cortex-A7 chips, all capable of running concurrently. And later models, like the MT6752, bump these up to Cortex-A53s.

Just to avoid any additional confusion, we will also note that HMP (heterogeneous multi-processing) is the technology allowing all cores to run concurrently. It can be used with big.LITTLE as well, as the two are not mutually exclusive.

When looking at chipset coupling for clustering purposes, it is also important to keep in mind that the two units need to be fully compatible on a functional level, so they can share common resources while working together on the same chip. This is another criterion that predetermines the role of many chips as performance cores or support cores in general.

The core bit width is a huge factor for proper clustering as well. Around 2012, when the Cortex-A53 was introduced, mobile processors started shifting rapidly towards 64-bit core width. 32-bit models are still being produced for certain use cases, but have mostly dropped out of circulation on mobile. This is important since there can be no mixing and matching between the two in a clustered design.

Generally speaking, Cortex models with a model number lower than 20 are 32-bit, while those at 30 and above are 64-bit and need to be matched up accordingly for a cluster to work.

But if you are interested in how the different Cortex cores compare to one another, you are welcome to join us on the next page where we go into more detail.