We conclude our overview on the features penetration history with the FM radio. The built-in radio receiver is another of those features that has been around for more than a decade now, but has started to rapidly grow in popularity only recently. 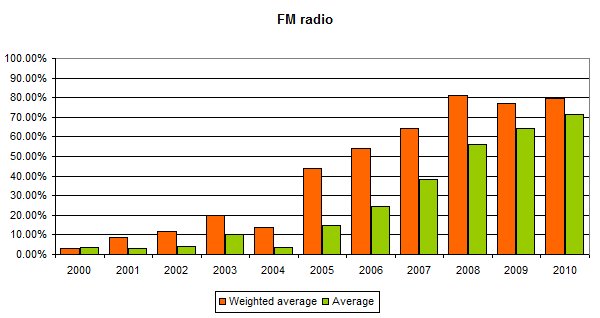 In the early days it was a feature almost exclusively available to high-end phones (like the Motorola A6188 and Nokia 8310), which explains the large gap between absolute and weighted average for those years. As FM modules became smaller and cheaper to implement, however, they started to make their way down the ranks and now virtually every handset has them.

For that to be achieved however the antenna is not included in the module and you have to plug some headphones to act as one. Not too bad of a compromise considering that you are most often using them to listen to the radio anyway. There are of course some exceptions, which come with built-in antennas such as the Sony Ericsson R306 and R300 duo, which even sported AM receivers.

Unlike most of the other features that are considered standard today, the FM radio receiver achieved its status harder. Despite being around since the start of this site, it still hasn't even reached 80% penetration. On the other hand its steady growth suggests that it will do so in another year or two so there's hardly something to worry about here.

It's always good to have an alternative for those moments when the preloaded content on your handset just doesn't do. Some prefer streaming audio over 3G connections instead of FM radio for that - but radio has better coverage and it's free, so the FM radio receivers are here to stay.

This article surely brought up a lot of sweet memories from the good old times. You know, from the days when today's "meh" features were considered a technological breakthrough.

It's amazing to see how quickly mobile phones evolved really. Even in times of technological revolution, it's hard to think of another business where new features are so quickly adopted and where they go from flagship-exclusives to mid-range necessities so fast.

If we may give you an example, fax machines thirty years ago were slow, loud and rather frustrating to use and nowadays they are…well, basically the same. Even cars with all the big investments that go into them can hardly rival mobile phones in terms of development speed.

Can you imagine what another ten years of such high-paced evolution will bring? How many features that are today considered eccentric will become a standard in that time? Will pico-projectors make it? And how about gyro-sensors? They might as well do. And, chances are they will bring company too.